To start the new year out I changed the layout of my blog, more for practical reasons (there is now a listing of topics at the top of each page to make it easier to locate stuff). And I wanted to change direction for a bit. I've been thinking about all the innovative, experimental and exciting projects that have been issued on CDs but not on vinyl; and there have been so MANY! My collection of CDs is larger than my vinyl LP collection (in quantity, not physical size), so, I thought, "Why not start writing about it and bring in the new year with a new perspective?"


So, here I go, starting off the new year breaking my rules again. (What a surprise!) The rule broken was to limit my writings about my music collection to just my vinyl LPs. I broke the rule once before and wrote about a compact disc (henceforth referred to as a CD), The Division Bell by Pink Floyd (and the blue glass bell that came with it) because it was just too good to NOT write about it.

Then two more subjects came up: the 45 RMP (henceforth referred to as a 45) Big Black EP recording of Bulldozer and the 45 of the soundtrack from the film, The Wild One. Ergo, both of those articles were written for the same reason: just too good to NOT write about them! I stretched the point in those cases as they were 12" and at least they fit into the SIZE requirement for an LP.

Thus, this is my second article on a CD starting a whole new trend about what I write. As with the Vinyl Archive, don't expect any top 40 entries in this new category (uh, right, already broke THAT rule with CD 1, oh, well). I'm excited about my new trajectory, although, when I read this article after I finished it, I realized I might have gone a little Big Bang Theory!

I'll have to work on that. Hope you like the places I go.


The Zaireeka CD album is the perfect one to start the new category, as well as the new year with, as it is a stimulating experiment in sound manipulation, audience participation and . . .

This is the eighth studio album by the alternative rock band, The Flaming Lips, which was released on October 28, 1997. It is an experimental rock piece that is a fascinating investigation into aleatoric or chance operation music (one of my favorite subjects, see: John Cage). The process used in this album was first introduced fifty or so years earlier with Pierre Henry and Pierre Schaeffer (see link below).

Some quick tech stuff first, though, to understand what's going on; the next sentence is important for that. The album has 4 discs with the SAME 8 songs on each of the discs; each song consists of four discrete stereo tracks, one from each of the four discs. (Follow me so far?) Wayne Coyne, of The Flaming Lips, discovered that no two CD players have the EXACT same play back rotation or consistancy (in microseconds but discernible). The album was designed so that when the four discs are played simultaneously on four separate audio systems, the four CDs would produce an harmonic or juxtaposed sound. Also, they can be played in different combinations, omitting one, two or even three discs. The variation of CD players and other factors create different results/sounds for the song each time it's played; thus, it never sounds exactly the same (hope this makes sense as it's a lot of fun playing around with it).

I have not been able to get four CD players together at the same time and location but I've played them using two and three players with fascinating results. I did find, however, that each part played singly is interesting as well. I've had a great time fooling around with them and I think that is the importance of and what the project is all about; not passively listening to a piece of music but actively experimenting with the possibilities of random events that can never be repeated. That is the marvel of Zaireeka. 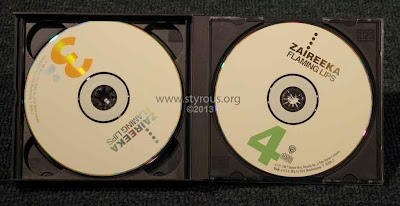 The speakers being used may be physically positioned in many different configurations (e.g. at different heights or even in entirely different rooms). Some listeners may even choose to disable the left or right speaker of one or more systems. Synchronization errors between the audio systems may cause effects such as reverb or echo being heard on one disc before the original sound is produced from another. Further, the type and quality of each audio system affects the relationship between the four CDs.

Zaireeka has an interesting etymology and entomology (the words are VERY appropriate here). The album's title is a portmanteau of two words: Zaire, chosen as a symbol of anarchy after Wayne Coyne heard a radio news story about the political instability of the African nation; and Eureka which comes from the Ancient Greek, εὕρηκα heúrēka, meaning "I have found (it)".

During 1996 and 1997, The Flaming Lips ran a series of events known as "The Parking Lot Experiments". The experiment was inspired by an incident in Coyne's youth, where he noticed that car radios in the parking lot at a concert were playing the same songs at the same time. Coyne created 40 cassette tapes to be played in synchronization. The band invited people to bring their cars to parking lots, where they would be given one of the tapes and then instructed when to start them. According to Coyne, the music was "a strange, fluid 20 minute sound composition".

The concept for Zaireeka came about because of a lack of personnel during club dates due to two events, which were recounted in The Spiderbite Song from The Lips' album, The Soft Bulletin. Michael Ivins was involved in a car crash, and Steven Drozd's hand became severely infected. Drozd initially claimed his hand had been bitten by a spider but later he admitted the infected abscess was caused by an injection of heroin. Those two incidents were the cause of the personnel shortage for performances, thus, the experimentation that resulted in Zaireeka. 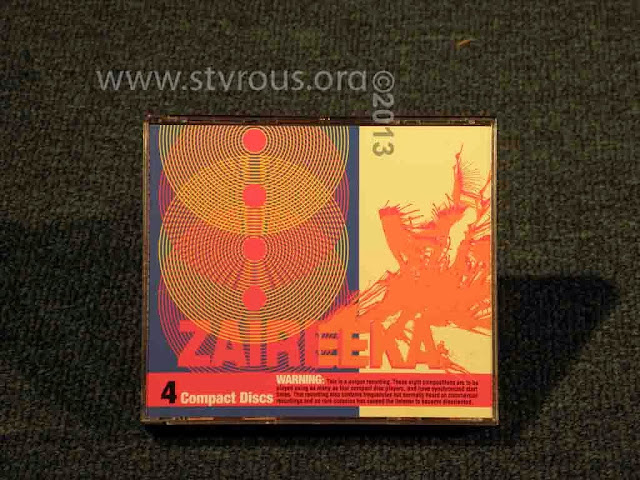 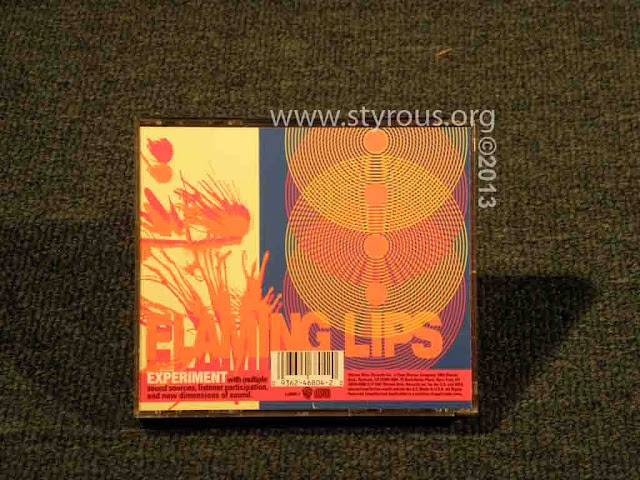 
The following photos are of the booklet that came with the CD. They should help to further explain the concept and process behind the project. There is a link (below) to a mix-down of the song, Okay I'll Admit That I Really Don't Understand, on YouTube. However, in my opinion, the very act of 'mixing' it down to a static, two-track stereo state destroys the whole concept of the process, thus, the sample is, in effect, pointless other than to give ONE example of the thousands (if not infinity) of possibilities of what it can sound like. 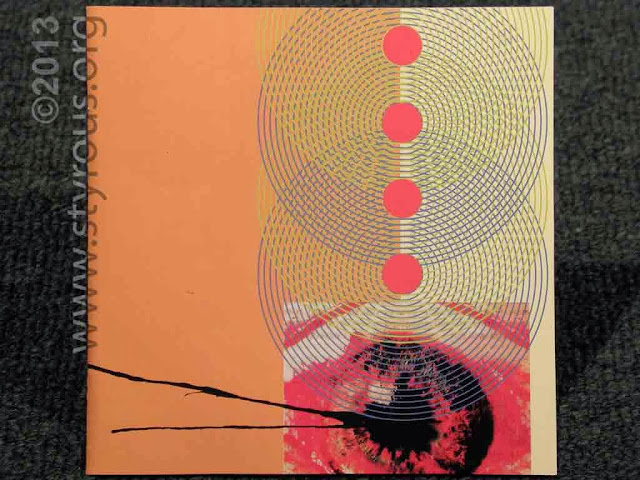 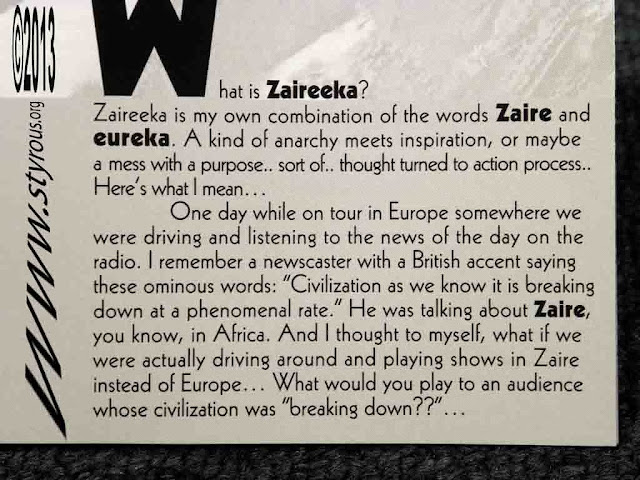 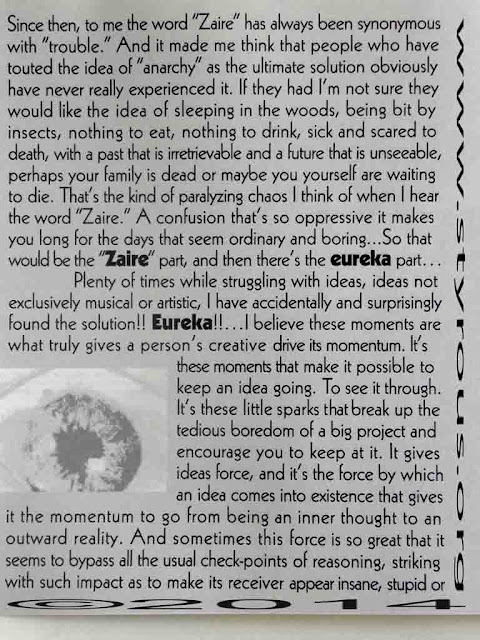 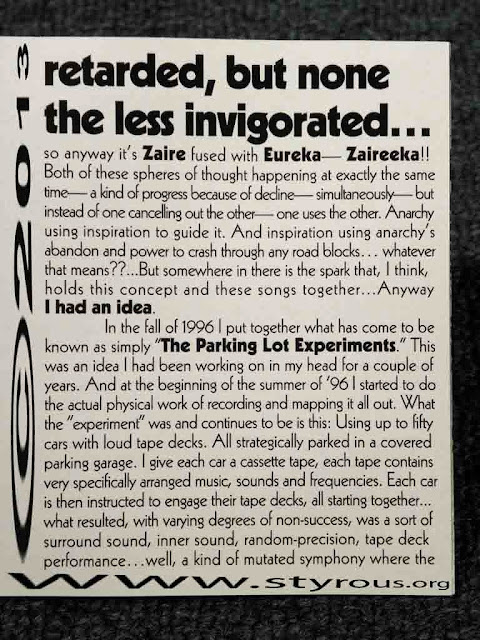 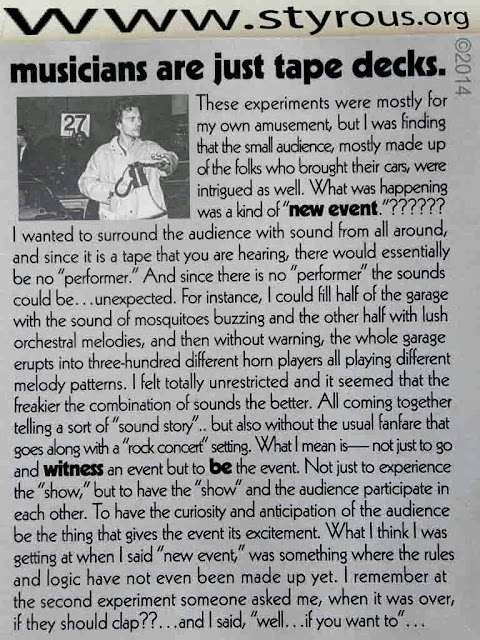 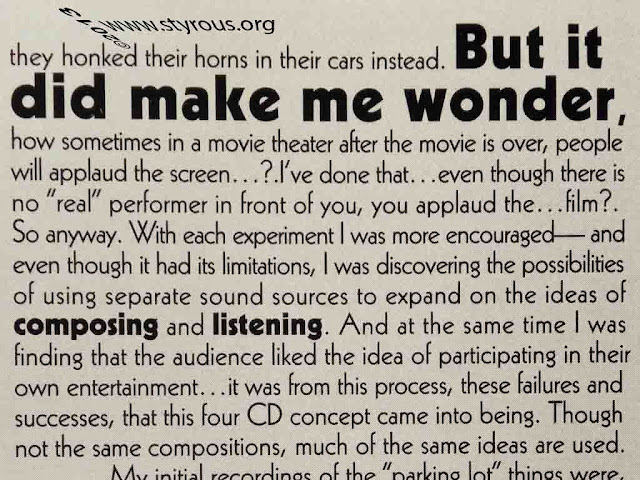 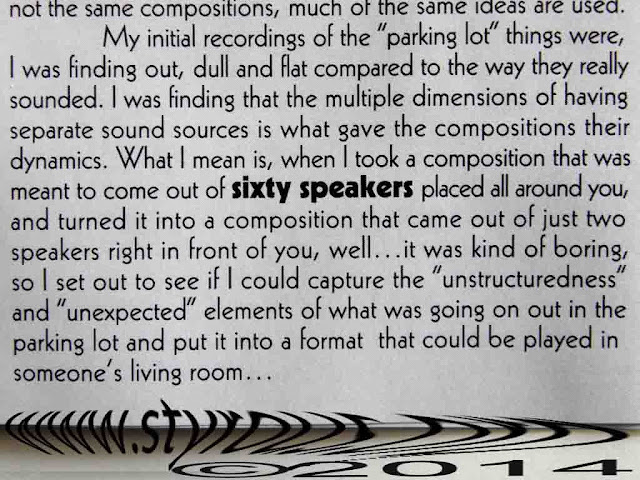 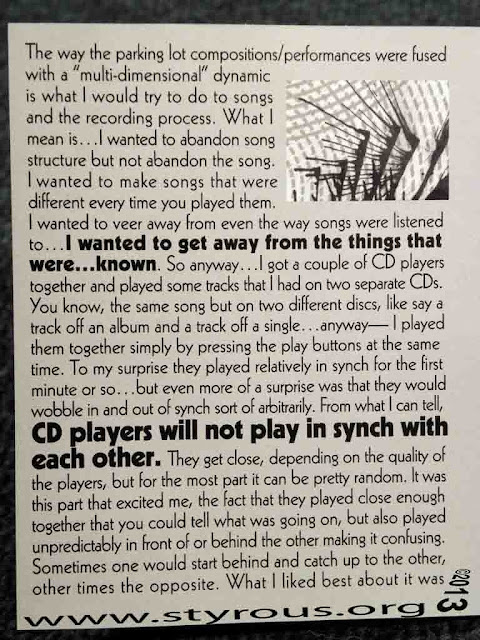 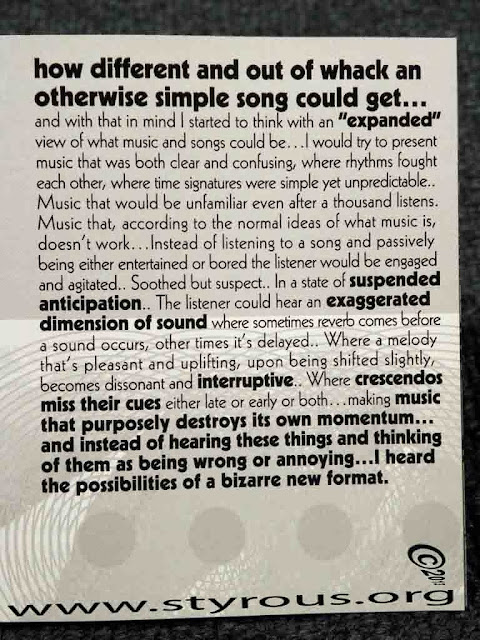 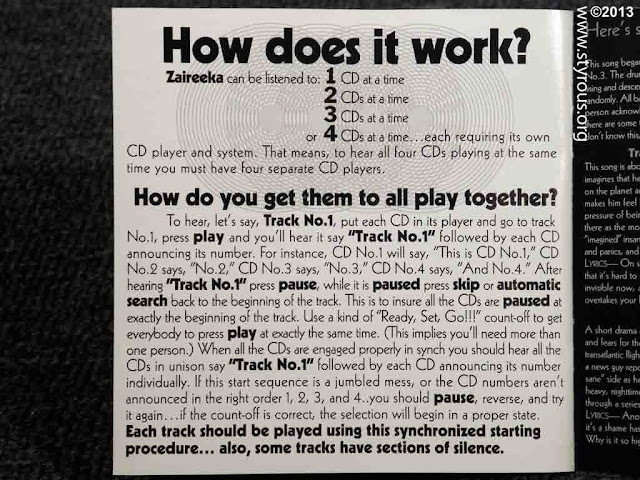 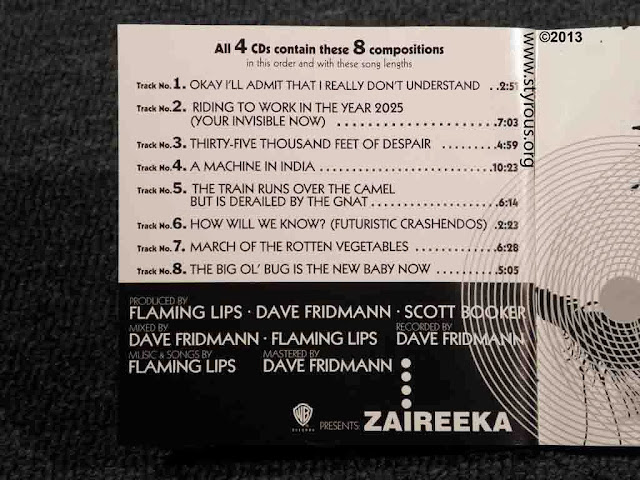 
If this hasn't done it for you, there is an explanation and demonstration video of Zaireeka, as well as the afore mentioned mix of the four discs of the song Okay I'll Admit That I Really Don't Understand on YouTube (links below).

The Flaming Lips began work on Zaireeka in April 1997 in the then-new Tarbox Road Studios. Initially, the band was frustrated while making the album. Even after diverting half of the budget for the next album into Zaireeka, there were no tangible results. The band experienced difficulty writing songs for the album. Finally, Coyne exclaimed "Look, we don't have to be friends... but we have to make this record!" While this philosophy aided progress, the band only began to complete songs when they learned to write FOR the medium as opposed to trying to split normal songs across four CDs.

Warner Bros. Records was initially apprehensive about releasing Zaireeka, so manager Scott Booker carefully researched the costs of releasing a box set. Booker discovered that Zaireeka could be released so that once 12,000 copies had been sold, the label would break even. (Advance orders for the album came to 14,000 copies.) Booker pitched the album to Warner Bros. Records president, Steven Baker.

Eventually, they reached an agreement in which the album would be released, although Zaireeka would not count towards the seven albums the band was contracted to deliver to Warner Bros. For an advance of $200,000, the band would make both Zaireeka and The Soft Bulletin. In addition, Booker mentioned that by allowing the media to proclaim how "weird" the band was with Zaireeka , they would be more prepared to treat The Soft Bulletin as a serious album. Zaireeka was released in October, 1997. The album was reissued on vinyl, April 20, 2013, for Record Store Day. 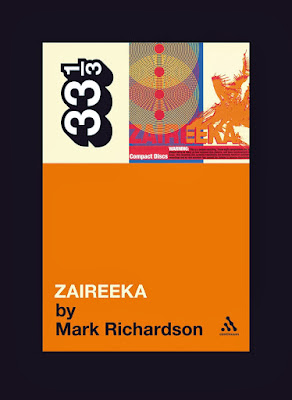 There is a paperback book, written for 33 1/3 by Mark Richardson, about the album. Richardson says, "Zaireeka is the anti-headphone and the anti-mp3. It purposely makes the two biggest developments in end-user music in the last 30 years irrelevant. Zaireeka is not mobile. It is not personal. It is not solitary, cannot be easily controlled, and can't easily be consumed in small doses. So another way to think of Zaireeka is as a one-off piece of technology that comes in a highly inconvenient dead-end format." (Way cool.) Zaireeka is available from AbeBooks and Amazon.

All four discs have identical track listings.
All songs written and composed by The Flaming Lips.

So, now where to? As I have researched, assembled and written this article, I have been thinking of the two 45s I've previously written about on the Viewfinder. They keep buzzing around in my brain and I keep hearing in my head the hundreds of fantastic, old 45s in my collection. You can bet your bippy there's a 45 RPM Archive in the works . . . . . is there never an end?

But that's the marvelous magic of music (forgive me, I just couldn't pass that one up): it's endless.

Have a healthy, creative and fantastic
New Year!