~
I started the Vinyl LP series because I have over 20,000 albums I am selling; each blog entry is about an album from my collection. Inquire for more information.

I remember my first trip to Italy in July of 1997. I had been in Barcelona for a while, when close friends rented an apartment in Rome and invited us to spend a long weekend. Since it was a quick, inexpensive flight we went.

I don't remember the street the beautiful, three-level apartment was on but it was in a fantastic location a couple of blocks from the Roman Forum. It was at the top of a building built in the 18th century with furniture also from that period. The bed was a disaster, however; the springs were like a steel hammock so we had to take the mattress from the bed and put it on the floor at night to sleep in comfort. But the apartment had an incredible 360° view from the roof which I could get to from the terrazza. It was right out of a movie set and it was spectacular!

I have so many wonderful memories of that trip: the sound of the bells of the churches (there were five) surrounding the apartment joining with sounds of church bells in areas further away echoing our near-by bells. Each bell unique-sounding in its own right so that a beautiful symphonic tintinnabulation was performed every hour on the hour.

I remember the incredible heat during the day (I almost fainted in the Forum); the lovely warm evenings and delicious dinners; a mid-afternoon lunch with the most incredible pizza I've EVER tasted (porcini mushrooms, onions, delicate spices and olive oil on a very thin, cracker-like crust, no tomato sauce) at Ristorante Al Gladiatore across from the Colosseum.

And, of course, I remember the one and only record album I bought during my brief stay there.

Where ever I travel, in addition to photographing, I search for new music; it is a given. Not only do I discover exciting music but it is my souvenir of where I was. I don't buy T-shirts or other paraphernalia (well, I may as presents to give to friends, um, except one I pinched from the restaurant). For me the music I buy is my memory marker for a particular trip. 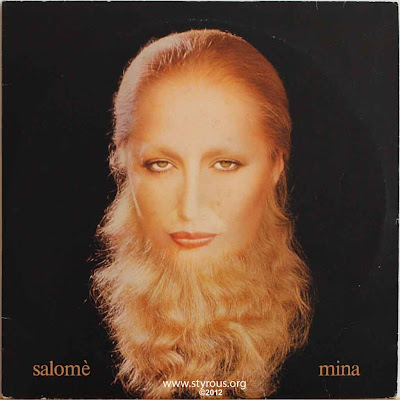 How could you pass up a cover like this?
cover photo by Mauro Balletti
photo of Salomé front cover by Styrous® 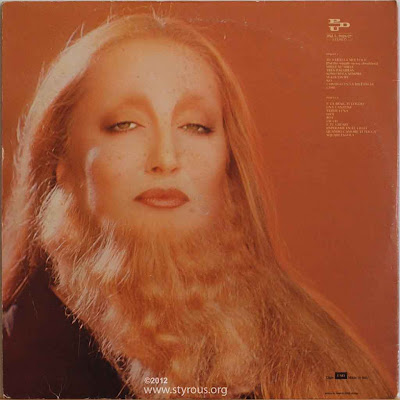 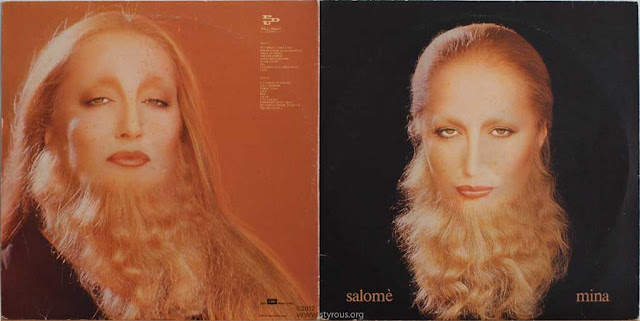 . . . and discovered it was a gatefold album 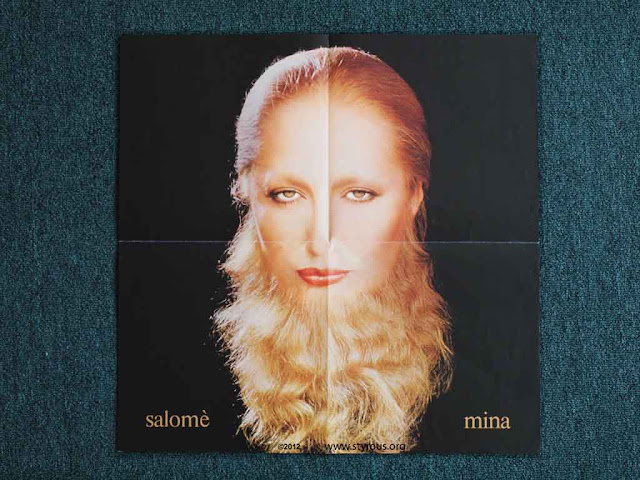 As it was a used copy, I could open the album
and found a 22" x 22" poster folded in the jacket cover.
poster photo by Mauro Balletti

I had no idea what the music sounded like; I understood no Italian (still don't) so the text gave me no clue. It was the cover that sold me. The imagery of Salomé, the Daughter of Herodias, and John the Baptist united in one individual was more than I could resist.

I could not play the music until I got back to the US but I was not disappointed and have since bought other albums by Mina. Samples of music from Salomé can be heard at CD Universe.

I discovered Mina was a dominant figure in Italian pop music from the mid-1960's to the 1970's combining traditional Italian songs, swing and rock. The public labeled her the "Tiger of Cremona" and the "Queen of Screamers". Mina's act combined sex appeal with public smoking, dyed blond hair, and shaved eyebrows to create a "bad girl" image with a three-octave vocal range (Wikipedia). Shirley Bassey (remember Goldfinger?) covered Mina's ballad, "Grande Grande Grande".

Because of her pregnancy and affair with a married actor, Mina was banned from Italian radio and TV in 1963. She was also heavily censored by the Roman Catholic Church.

She stopped public appearances in 1978 but continues to release new albums on a yearly basis. 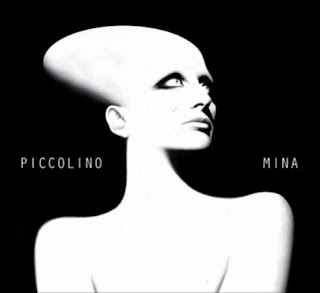 This is the cover of her latest album,
Piccolino, released in 2011.
photographer unknown


Videos of Mina's music can be found on uTube.

So ends my tale of the album, Salomé, by Mina.

An aside: when I was researching info for this article I came across a link to Mina Salomé a section of the MTI Blog (Mineralogía Topográfica Ibérica) which is about Iberian Topographic mineralogy. The site has NOTHING to do with Mina and is not in English but, if you search around the different blog entries, you can find interesting and sometimes stunning photographs. Check it out, if you have time to spend and just want something beautiful and unexpected to see.