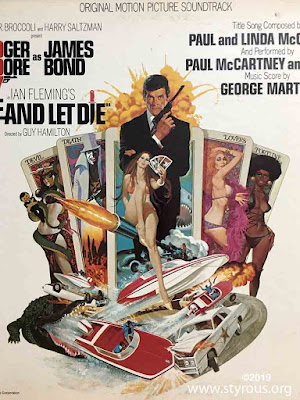 Live And Let Die ~ soundtrack
vinyl LP front cover detail
Artwork by Bob McGinnis
detail photo of album cover by Styrous®
Today is the birthday of Roger Moore who was an English actor who began his career as British secret agent James Bond with the film, Live and Let Die. He would star in seven more Bond films up to 1985 when he reprized the role for the last time in A View to a Kill.
Live And Let Die is the soundtrack to the eighth James Bond film of the same name. It was scored by George Martin. The title song was written by Paul and Linda McCartney and performed by Paul McCartney and Wings. 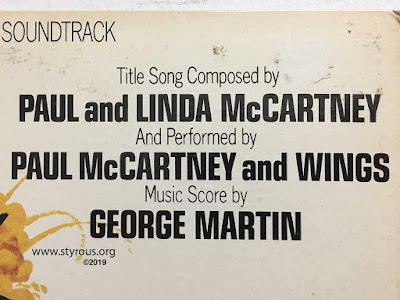 vinyl LP front cover detail
Artwork by Bob McGinnis
detail photo of album cover by Styrous®
The music for most of the Bond films through Diamonds Are Forever had been written by John Barry, however, due to his working on a musical, and having fallen out with Bond producer Harry Saltzman, he did not score the film.
George Martin, who wrote the score for Live And Let Die, was an English record producer, arranger, composer, conductor, audio engineer, and musician. He was referred to as the "Fifth Beatle" because of his involvement on each of the Beatles' original albums. The orchestra was conducted by Martin and recorded at AIR Studios.
Live And Let Die was the first time a rock music arrangement was used to open a Bond film. It was also the first time that McCartney and Martin had worked together since Abbey Road in 1969. 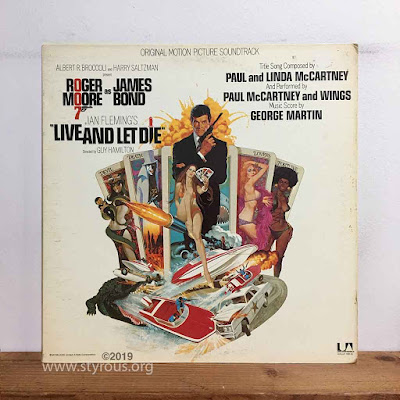 vinyl LP front cover
Artwork by Bob McGinnis
photo of album cover by Styrous®
Bob McGinnis is a world-renowned painter whose prolific, award-winning artwork spans more than six decades. In recognition of the excellence of his paintings, in 1993 he was elected to the Society of Illustrators Hall of Fame which includes Norman Rockwell, N. C. Wyeth, Winslow Homer, Robert Peak, Frederic Remington, Frank McCarthy and Maxfield Parrish who's work was used on the cover of The Waking Hour by Dali's Car (link below). 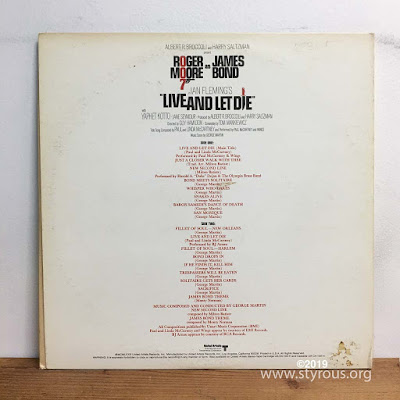 vinyl LP back cover
photo by Styrous®
Live and Let Die is a 1973 spy film and the eighth film in the James Bond series produced by Eon Productions and the first to star Roger Moore as the fictional MI6 agent James Bond. It was directed by Guy Hamilton and produced by Albert R. Broccoli and Harry Saltzman. The producers had wanted Sean Connery to return after his role in the previous Bond film Diamonds Are Forever, Connery declined, sparking a search for a new actor to play Bond; Moore was signed for the lead role.
The film is based on the Ian Fleming 1954 novel of the same name. It  was released during the height of the blaxploitation era, and many blaxploitation archetypes and clichés are depicted in the film. It was the first James Bond film featuring an African-American Bond girl romantically involved with 007, Rosie Carver, who was played by Gloria Hendry (links to cast & plot below). 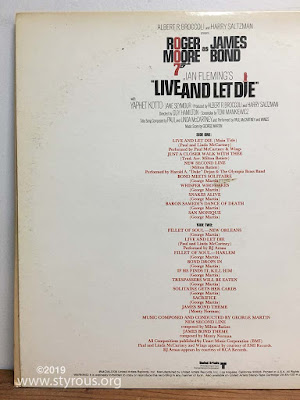 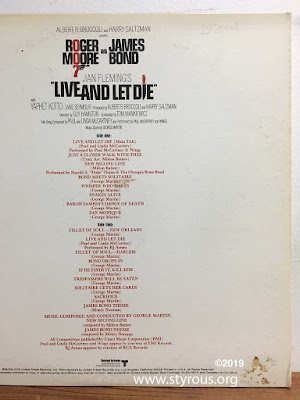 The film has two versions of the title song, Live And Let Die, in addition to the version by the  McCartneys, B. J. Arnau did a soul, sort of rock cover. My favorite cover is by Guns N' Roses, which appears on their 1991 album Use Your Illusion I; their version was nominated for the Grammy Award for Best Hard Rock Performance at the 35th Annual Grammy Awards in 1993.
Live And Let Die was the first Bond theme song to be nominated for the Academy Award for Best Original Song, but lost the award to The Way We Were by Barbra Streisand. I wasn't too upset because I loved The Way We Were, it's one of my favorite, beautiful but nostalgic, songs. Live And Let Die was also nominated for the Best Arrangement Accompanying Vocalist(s) at the 16th Annual Grammy Awards in 1974.
In 2012, McCartney was awarded the Million-Air Award from Broadcast Music, Inc. (BMI), for more than 4 million performances of the song in the US. 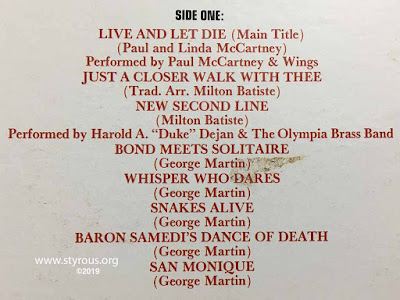 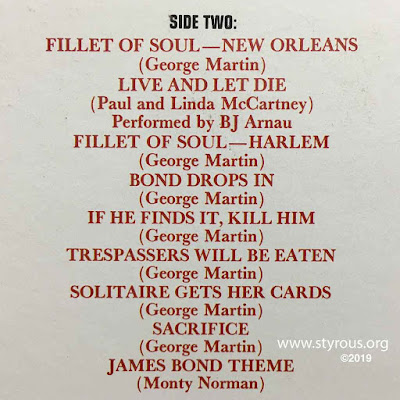 Roger Moore was born on October 14, 1927 in Stockwell, London. His father was a policeman, his mother was born in Calcutta, India; however, she was not Indian. He was evacuated to Holsworthy in Devon during the Second World War, and attended Launceston College in Cornwall. He studied acting then, at 18, shortly after the end of the Second World War, he was conscripted for national service. On 21 September 1946, he was commissioned into the Royal Army Service Corps as a second lieutenant. He was an officer in the Combined Services Entertainment section, eventually becoming a captain commanding a small depot in West Germany. There he looked after entertainers for the armed forces passing through Hamburg. 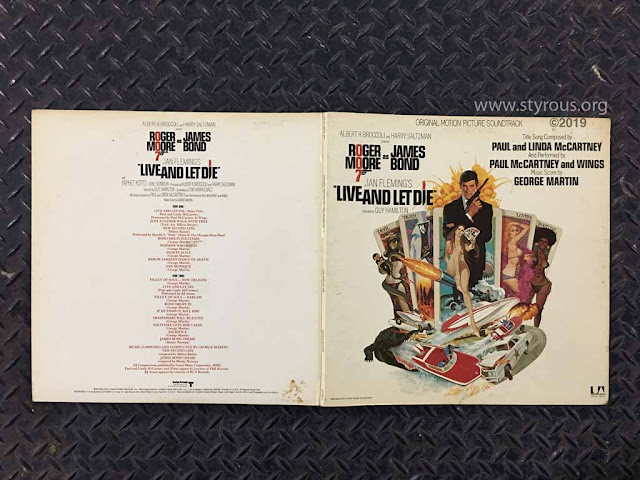 He did a series of minor films. In the early 1950s Moore worked as a model, appearing in print advertisements in the UK for knitwear (earning him the nickname "The Big Knit") and a wide range of other products such as toothpaste. For some reason, I find this remarkable!!!!
He started his MGM contract with a small role in The Last Time I Saw Paris (1954), flirting with Elizabeth Taylor. He appeared in Interrupted Melody, a biographical movie about the recovery from polio of opera singer Marjorie Lawrence, in which he was billed third under Glenn Ford and Eleanor Parker as Lawrence's brother Cyril. That same year, he played a supporting role in the swashbuckler The King's Thief starring Ann Blyth, Edmund Purdom, David Niven and George Sanders. 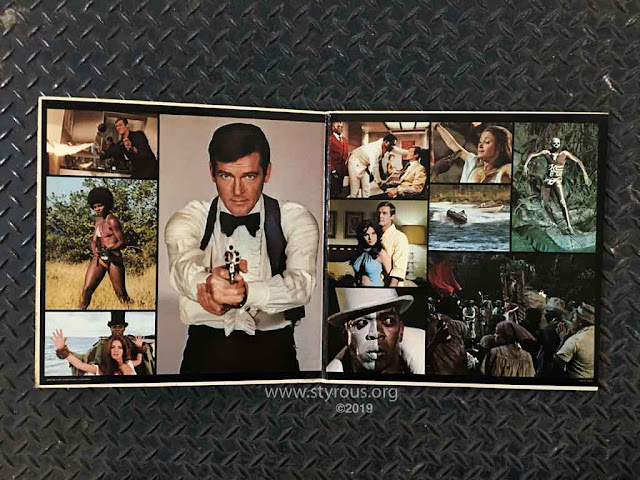 Moore's first success was playing the hero, Sir Wilfred of Ivanhoe, in the 1958–59 series, a loose adaptation of the 1819 romantic novel by Sir Walter Scott set in the 12th century during the era of Richard the Lionheart, 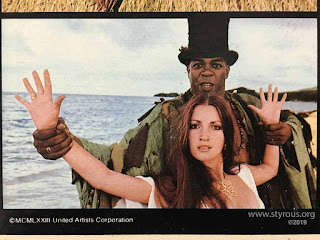 In the sixites, Moore was cast as Beau Maverick, an English-accented cousin of frontier gamblers Bret Maverick (James Garner), Bart Maverick (Jack Kelly), and Brent Maverick (Robert Colbert) in the much more successful ABC/WB Western series Maverick. Sean Connery was flown over from Britain to test for the part, but turned it down (link below).
Lew Grade cast Moore as Simon Templar in a new adaptation of The Saint, based on the novels by Leslie Charteris. The television series was broadcast by ITV in the UK between 1962 and 1969. NBC picked up the show in 1966. By early 1967, Moore had achieved international stardom. 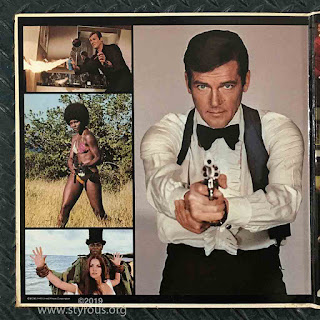 Lew Grade lured Moore to star alongside Tony Curtis in The Persuaders! in 1971. The show featured the adventures of two millionaire playboys across Europe. Moore was paid the then-unheard-of sum of £1 million for a single series, making him the highest-paid television actor in the world.
Moore did not consider the possibility of taking on the role of 007 until it seemed clear that Connery had stepped down as Bond for good. At that point, Moore was approached, and he accepted the  offer by producer Albert Broccoli in August 1972. In his autobiography, Moore writes that he had to cut his hair and lose weight for the role. Although he resented having to make those changes, he was finally cast as James Bond in Live and Let Die (1973). 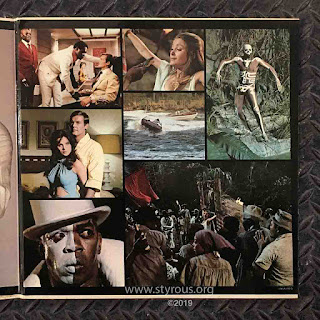 Moore's family announced his death in Switzerland, on 23 May 2017 from liver cancer. He died at his home in Crans-Montana, in the presence of his family, five months short of his 90th birthday. 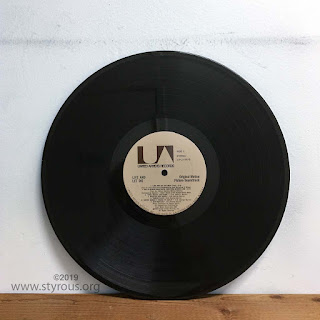 vinyl LP, side 1
photos by Styrous® 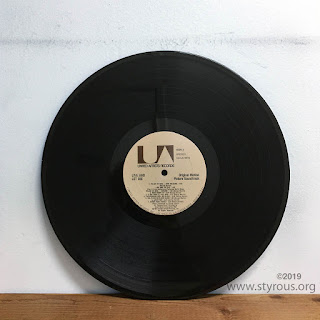 vinyl LP, side 2
photos by Styrous® 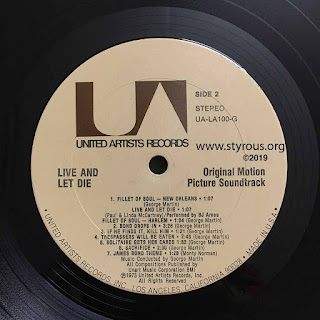 Gatefold cover.
Barcode and Other Identifiers