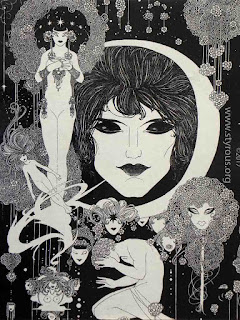 
Today, March 8, marks the birth of Gábor Szabó who was born Szabó Gábor István in 1936 in Budapest, Hungary. Did I hear you ask, "Who is Gábor Szabó?" Well, he was a great jazz guitarist who never got the recognition he truly deserved. To hear his playing is to be transported to a distant land at times. He incorporated elements of folk music from his native Hungary, from Gypsy and Roma influences, as well as rock music's use of feedback, jazz, Indian, Asian and Latin traditions.

Szabó does an incredible instrumental cover of the Rolling Stones song, Paint It Black; his version is a bit dissonant, slightly off-key and dark. The video for it is also dark as well as stark and frightening on many levels. A must see especially in these weird times. 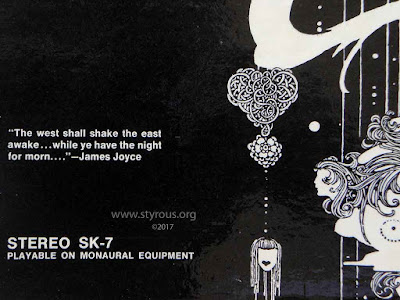 
But Dreams is my favorite album by Szabó. It was recorded in Los Angeles, California, on August 6, 7 and 9th of 1968 with overdubs recorded in New York City on August 22, the same year. It is an album that was years ahead of its time as it mixed jazz, pop-rock and Hungarian music. This assemblage of music gives the album an exotic feeling of mysterious adventures in distant lands.

My favorite song on the album is Galatea's Guitar, which runs five and a half minutes. The intro is a slow, dreamy variation on the song, Golden Earrings, an old gypsy tune which Peggy Lee made popular in 1946. Galatea's Guitar is languid, dreamy, sensual and totally sublime. 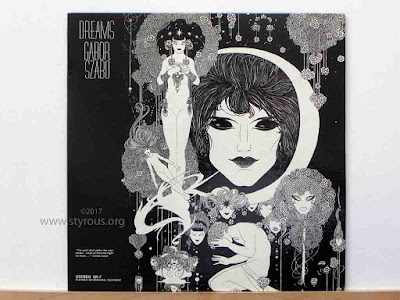 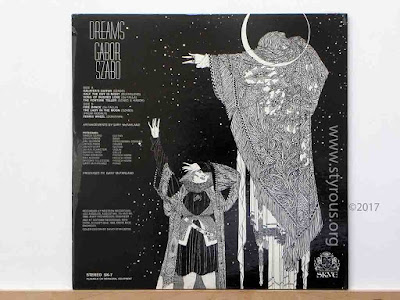 The album is a gatefold format with the design by David Stahlberg. The motif is perfect for the title and theme of the album. 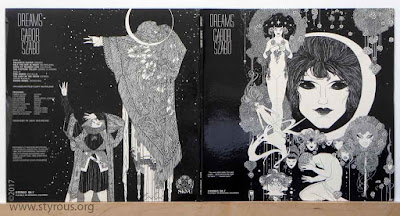 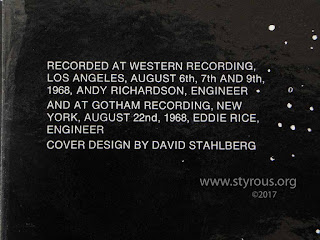 In 1970 David Stahlberg won the Grammy Award for Best Recording Package for the album, America the Beautiful, performed by Gary McFarland. 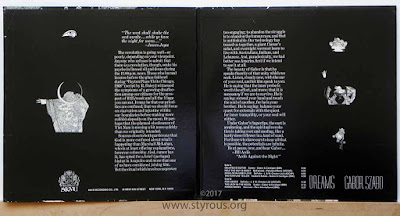 Among the treasures on the album are covers of two Manuel de Falla pieces of music: Song of Love's Sorrow (he calls it, Song of Injured Love) and the tempestuous Fire Dance from the 1915 ballet, El amor brujo. In the ballet a young Andalusian gypsy girl called Candela is haunted by the ghost of her dead husband. To get rid of him, all the gypsies make a large circle around their campfire at midnight. Candela then performs the Ritual Fire Dance. This causes the ghost to appear and she dances with him. As they whirl around faster and faster, the ghost is drawn into the fire, making it vanish forever. it is a stunning tour de force. 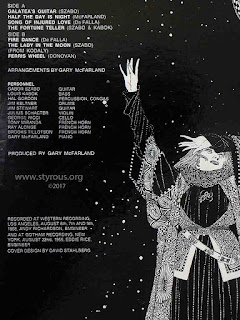 Song of Injured Love has a slow, dreamy guitar & cello duet intro that goes into a bouncy, moderate speed tune that refers to the original, however, it loses the Flamenco essence. It's still a very lovely piece.

The Fortune Teller is another show-stopper. It has a fast erratic intro that goes into a fast, syncopated beat that evolves into a fast, jazzy gallop of only a guitar and slap bass patter that slows down then back to the original intro melody that ends abruptly. A really nice treatment. 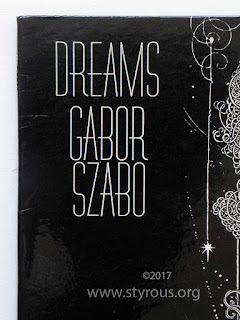 Szabó began playing guitar, inspired by jazz music heard on Voice of America radio broadcasts, when he was 14. He escaped Hungary in 1956, the year of the attempted revolt against Soviet-dominated Communist rule, and moved to the United States. 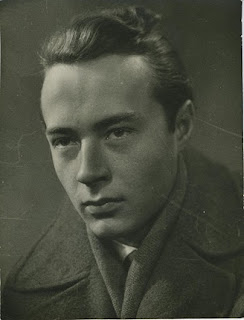 Eventually settling in California, Szabo struggled to establish himself as a musician; for a time he worked as a janitor and used his earnings to attend the Berklee School of Music in Boston, Massachusetts, between 1958 and 1960. Reaching the end of his money, Szabo returned to California and again sought to break into the music field, working in property management to support his family.

In 1958, Szabó was invited to perform at the Newport Jazz Festival. In 1961, the long-sought opportunity arrived in the form of an invitation to join The Chico Hamilton Quintet. After a somewhat tenuous beginning (Szabo was actually fired by Hamilton and then re-hired later in the year), the guitarist quickly began to establish himself with jazz audiences through his strikingly unique approach to his instrument.  His mid-1960s jazz/gypsy guitar work strongly influenced Carlos Santana. It was during this period that Szabo first performed with Lena Horne - an association that would later evolve into a collaborative record and an appearance on Horne's television special in 1970. 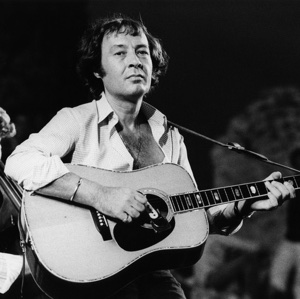 In the late 1960s Szabó co-founded the short-lived Skye record label along with Cal Tjader and Gary McFarland. He rcorded an album with Lena Horne on Skye in October and November 1969. Szabó had been part of Horne's backup band when she performed at The Nugget in Nevada in November 1966 and then when she performed (with Harry Belafonte) at Caesar's Palace in Las Vegas in September 1969. Likely Szabó had been first introduced to Lena Horne by her longtime accompanist and his former band leader Chico Hamilton. 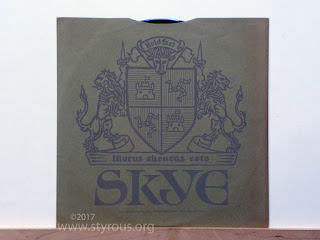 In the late 1970s, Szabo became affiliated with the Church of Scientology and signed in November 1978 with Vanguard Artists International, a firm headed by several Scientologists. In 1980, Szabó filed a $21 million lawsuit against the Church of Scientology, accusing the organization of embezzling his money, kidnapping him and forcing him to undergo a Scientology "Life Repair Course." In a 36-page complaint, Szabó's attorney detailed an elaborate list of accusations which included Scientology's alleged takeover of the musician's career after he sought help in the church's drug treatment program. The church filed a countersuit in March 1980 charging Szabó with fraud, and in 1981 both sides dropped their suits. Szabó claimed he dropped his suit because "I found it too time-consuming and I couldn't concentrate on my career." He maintained that he stood by his original allegations. 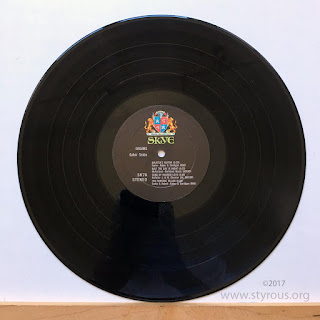 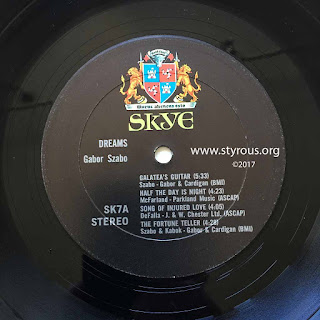 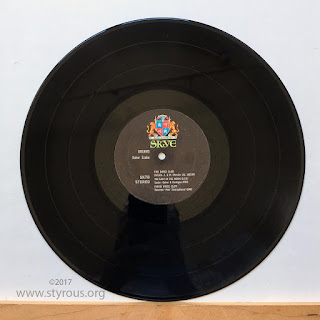 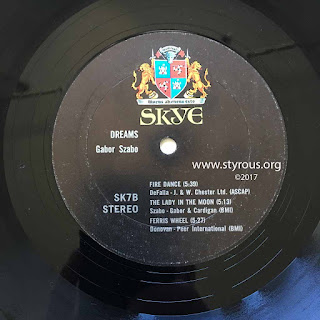 Gábor Szabó died in Budapest, Hungary, on February 26, 1982 from liver and kidney disease while on a visit to his homeland. He was just 45 years old.

All compositions by Gábor Szabó except as indicated