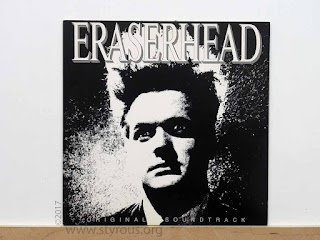 I am having a hard time wrapping my head around the fact that it was forty years ago today, on March 19, 1977, Eraserhead, the first feature length film by David Lynch was released to the world and the career of a great film maker was launched.

It seems only a few years ago that I went to the Roxy Theater a few blocks from my studio in the Mission one night to see a film I had no knowledge of; I would often go there not knowing what I would see and was never disappointed. Wikipedia says the initial attendance was small but I remember the joint was packed on opening night. They obviously knew something extraordinary and unique was in store but I didn't. I was in for a startling if not shocking surprise! 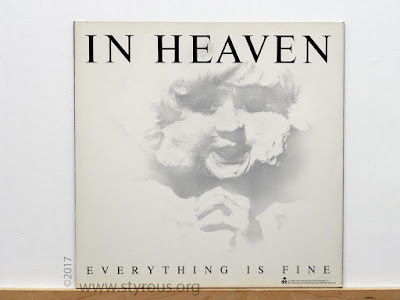 Eraserhead is a horror film written, produced, and directed by Lynch and shot in black-and-white. The film was produced with the assistance of the American Film Institute (AFI) during the director's time studying there. Starring Jack Nance, Charlotte Stewart, Jeanne Bates, Judith Anna Roberts, Laurel Near, and Jack Fisk, it tells the story of Henry Spencer (Nance), who is left to care for his grossly deformed child in a desolate industrial landscape. Throughout the film, Spencer experiences dreams or hallucinations, featuring his child and the Lady in the Radiator (Near). 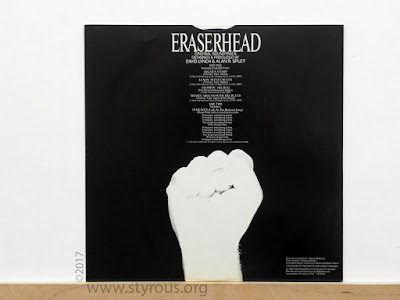 
Eraserhead spent several years in principal photography because of the difficulty of funding the film; donations from Fisk and his wife Sissy Spacek kept production afloat. The film was shot on several locations owned by the AFI in California, including Greystone Mansion and a set of disused stables in which Lynch lived. Additional funds were provided by Nance's wife Catherine E. Coulson, who worked as a waitress and donated her income, and by Lynch himself, who delivered newspapers throughout the film's principal photography. During one of the many lulls in filming, Lynch was able to produce the short film The Amputee, taking advantage of the AFI's wish to test new film stock before committing to bulk purchases. The short piece starred Coulson, who continued working with Lynch as a technician on Eraserhead.

The first scene to be filmed following the long hiatus of "Eraserhead" (principal photography started May 1972, and resumed May 1974) involved the Lady in the Radiator, played by Laurel Near. Laurel sang in a trio with her two sisters, Holly and Timi, the latter was a good friend of Catherine E. Coulson (assistant camera/assistant to director). 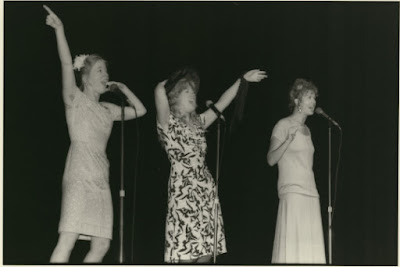 In Heaven was covered by the Pixies as part of the recording session for their Come On Pilgrim album, this version later being released on the Pixies album. 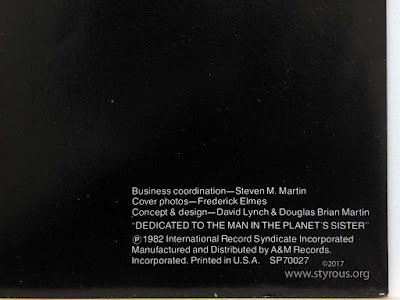 Eraserhead gained popularity over several long runs as a midnight movie. Since its release, the film has earned positive reviews. The surrealist imagery and sexual undercurrents have been seen as key thematic elements, and the intricate sound design as its technical highlight. Thematic analysis of the film has also highlighted these issues and has elaborated on Spencer's fatalism and inactivity. In 2004, the film was preserved in the National Film Registry by the United States Library of Congress as being "culturally, historically, or aesthetically significant". 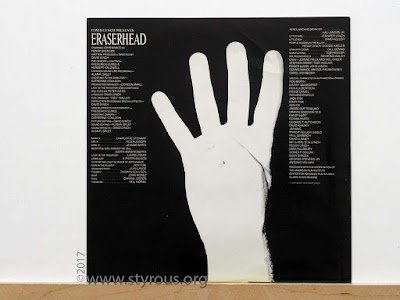 The plot, camera work sets, music, acting, EVERYTHING about the film is totally surreal; it is out of a nightmare! The music is frightening, at times soothing, well, only once. Links to all below. 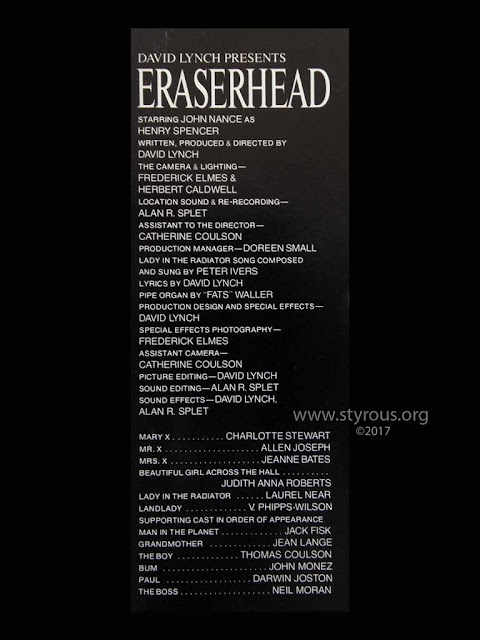 The physical effects used to create the deformed child have been kept secret. The projectionist who worked on the film's dailies was blindfolded by Lynch to avoid revealing the prop's nature, and he has refused to discuss the effects in subsequent interviews. The prop—which Nance had nicknamed "Spike"—featured several working parts; its neck, eyes and mouth were capable of independent operation. Lynch has offered cryptic comments on the prop, at times stating that "it was born nearby" or "maybe it was found". It has been speculated by John Patterson of The Guardian that the prop may have been constructed from a skinned rabbit or a lamb fetus. The child has been seen as a precursor to elements of other Lynch films, such as the make-up of John Merrick in the 1980 film The Elephant Man and the sandworms of the 1984 film, Dune.

Below is the poster included with the original vinyl LP of the infant in the film Eraserhead. The child is a deformed creature whose appearance is one of the film's defining surreal elements. 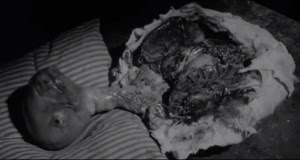 The Eraserhead production crew was very small, composed of Lynch; sound designer Alan Splet; cinematographer Herb Cardwell, who died during production and was replaced with Frederick Elmes; production manager and prop technician Doreen Small; and Coulson, who worked in a variety of roles. 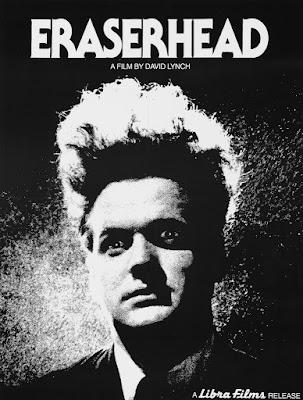 
After a poorly received test screening, in which Lynch believes he had mixed the soundtrack at too high a volume, the director cut twenty minutes of footage from the film, bringing its length to 89 minutes. Among the cut footage is a scene featuring Coulson as the infant's midwife, another of a man torturing two women—one again played by Coulson—with a car battery, and one of Spencer toying with a dead cat.

The script for Eraserhead was influenced by Lynch's reading as a film student of the Franz Kafka 1915 novella, The Metamorphosis and the 1836 short story by Nikolai Gogol, "The Nose". Lynch also confirmed in an interview with Metro Silicon Valley that the film "came together" when he opened up a Bible, read one verse from it, and shut it; in retrospect, Lynch could not remember if the verse was from the Old Testament or the New Testament. 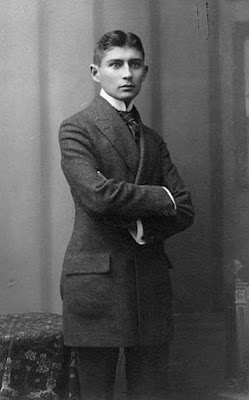 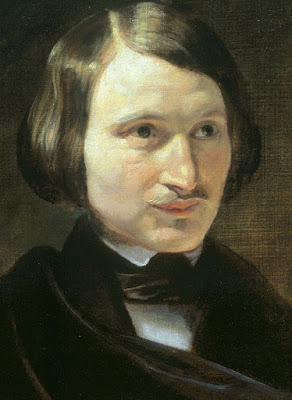 The film has also been noted for its strong sexual themes. Opening with an image of conception, the film then portrays Henry Spencer as a character who is terrified of, but fascinated by, sex. The recurring images of sperm-like creatures, including the child, are a constant presence during the film's sex scenes; the apparent "girl next door" appeal of the Lady in the Radiator is abandoned during her musical number as she begins to violently smash Spencer's sperm creatures and aggressively meets his gaze. David J. Skal, in his book The Monster Show: A Cultural History of Horror, has described the film as "depict[ing] human reproduction as a desolate freak show, an occupation fit only for the damned". Skal also posits a different characterization of the Lady in the Radiator, casting her as "desperately eager for an unseen audience's approval". In his book David Lynch Decoded, Mark Allyn Stewart proposes that the Lady in the Radiator is in fact Spencer's subconscious, a manifestation of his own urge to kill his child, who embraces him after he does so, as if to reassure him that he has done right.

As a character, Spencer has been seen as an everyman figure, his blank expression and plain dress keeping him a simple archetype. Spencer displays a pacifistic and fatalistic inactivity throughout the film, simply allowing events to unfold around him without taking control. This passive behavior culminates in his sole act of instigation at the film's climax; his apparent act of infanticide is driven by his life of being domineered and controlled. Spencer's inactivity has also been seen by film critics Colin Odell and Michelle Le Blanc as a precursor to Lynch's 1983–92 comic strip The Angriest Dog in the World. 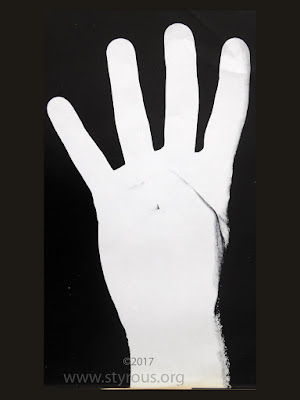 
Lynch and sound designer Alan Splet spent a year working on the film's audio after their studio was soundproofed. The film's soundtrack features organ music by Fats Waller and includes the song, In Heaven, penned for the film by Peter Ivers.

The soundtrack to Eraserhead was released by I.R.S. Records in 1982. The two tracks included on the album feature excerpts of organ music by Fats Waller and the song, In Heaven, written for the film by Peter Ivers. The soundtrack was re-released on August 7, 2012, by Sacred Bones Records in a limited pressing of 1,500 copies. The album has been seen as presaging the dark ambient music genre, and its presentation of background noise and non-musical cues has been described by Mark Richardson of Pitchfork Media as "a sound track (two words) in the literal sense". 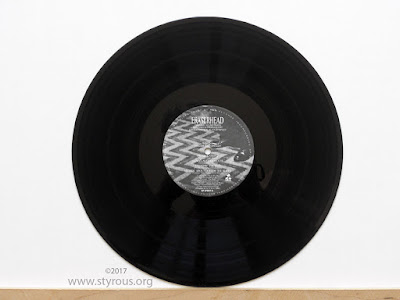 Eraserhead's sound design has been considered one of its defining elements. Although the film features several hallmark visuals—the deformed infant and the sprawling industrial setting—these are matched by their accompanying sounds, as the "incessant mewling" and "evocative aural landscape" are paired with these respectively. The film features several constant industrial sounds, providing low-level background noise in every scene. This fosters a "threatening" and "unnerving" atmosphere, which has been imitated in works such as the 1995 thriller by David Fincher, Seven, and the Coen brothers' 1991 drama Barton Fink. The constant low-level noise has been perceived by James Wierzbicki in his book Music, Sound and Filmmakers: Sonic Style in Cinema as perhaps a product of Henry Spencer's imagination, and the soundtrack has been described as "ruthlessly negligent of the difference between dream and reality". The film also begins a trend within Lynch's work of relating diegetic music to dreams, as when the Lady in the Radiator sings In Heaven during Spencer's extended dream sequence. This is also present in "Episode 2" of Twin Peaks, in which diegetic music carries over from a character's dream to his waking thoughts; and in 1986's Blue Velvet, in which a similar focus is given to the song, In Dreams, by Roy Orbison. 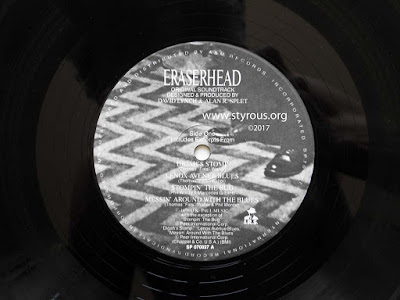 During production, Lynch began experimenting with a technique of recording dialogue that had been spoken phonetically backwards and reversing the resulting audio. Although the technique was not used in the film, Lynch returned to it for "Episode 2", the third episode of his 1990 television series Twin Peaks. 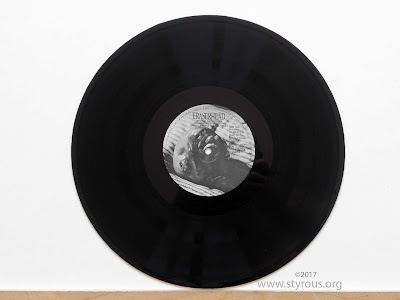 
Lynch worked with Alan Splet to design the film's sound. The pair arranged and fabricated soundproof blanketing to insulate their studio, where they spent almost a year creating and editing the film's sound effects. The soundtrack is densely layered, including as many as fifteen different sounds played simultaneously using multiple reels. Sounds were created in a variety of ways—for a scene in which a bed slowly dissolves into a pool of liquid, Lynch and Splet inserted a microphone inside a plastic bottle, floated it in a bathtub, and recorded the sound of air blown through the bottle. After being recorded, sounds were further augmented by alterations to their pitch, reverb and frequency. 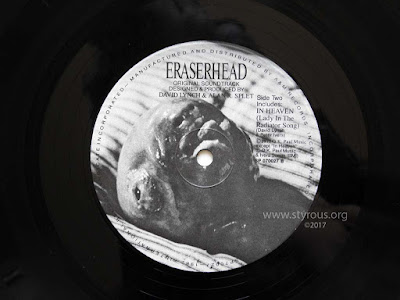 
In 2007, Lynch said,
"Believe it or not, Eraserhead is my most spiritual film."