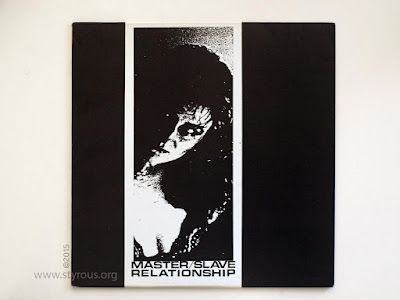 This is the first entry in my new series,

I am surprised to see this on iTunes. I remember getting this through RRRecords back in the 80's with a statement that I was over 18 to buy it. The first six song are strait power electronics. You are going to get an earful of harsh noise and screaming. The last song, the title cut has to be heard. It is a spoken word with laided back electronics. It is geared towards S/M, so there is dirty talk. This is all the work of one women, Debbie Jaffe. It is classic of the time and remains a power piece to listen to today! If you are a fan of Non, Throbbing Gristle, Nurse With Wound or Whitehouse. 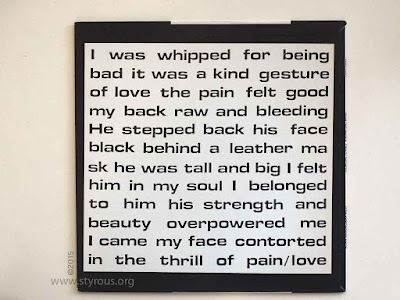 I'm in no way involved in the S/M scene so I can't really say whether this works or not but Music For A Sadomasochistic Scene is deliberately minimal. It threatens and seduces, with mammoth swathes of ambient keyboards, and the swish of percussion. In many ways it compares with Coil's How To Destroy Angels, which isn't too surprising as both are concerned with sexual energy. Debbie's been active in the S/M scene for well over a decade and most recently released a CD-ROM. 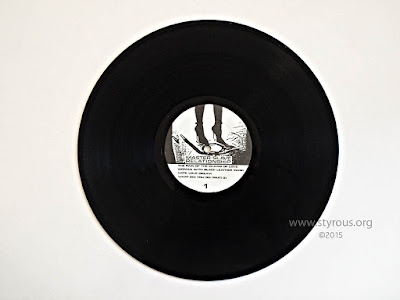 
"...Debbie is a person who understands her desires and fully intends to fulfill them. A Madonna for the deviant underground, perhaps?..." MUSIC FROM THE EMPTY QUARTER (UK) magazine. 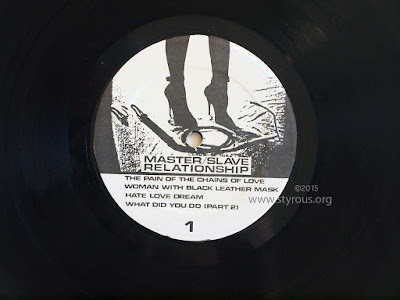 From TERRORIZER magazine --
Debbie is the mistress behind the ambient darkness of MSR. Developing a love for Industrial in the early 80's, Debbie has been creating music for over a decade. 'Scene' contains nine majestic tracks of fetish electronics that czress th e listener into a seductive submission. Her soundscapes hint of deviant sex in basement playgrounds. Intended as atmosphere for S&M play, 'Scene' is enthralling and subversive. What it lacks is the pretentiousness often associated with the latex crowd. Debbie approaches her talented endeavors with honest sincerity. This multi-talented woman has also written essays on deviant sexuality as well as designing and developing her own multi-media CD-ROM. The CD booklet contains a sample of her sexually disturbing photography. Master/Slave Relationship is sure ot please lovers of dark electronics as well as those desiring discipline. There is little doubt that Debbie is among the handful of strong, uncompromising women in underground music today.
-- Chad Hensley, TERRORIZER magazine from the U.K. 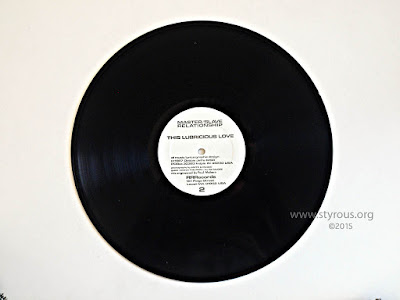 
"With her flanged keyboards and her steady but cold rhythms she manipulates what must be the darkest fears of men: the temptress with the knife hid up her.. whatever... (her vocal style) isn't an easy thing to describe; but she is the great seductress, better than Lydia Lunch even, and she never lets you forget it." Carl Howard UNSOUND Vol. 3 Number 1 p71 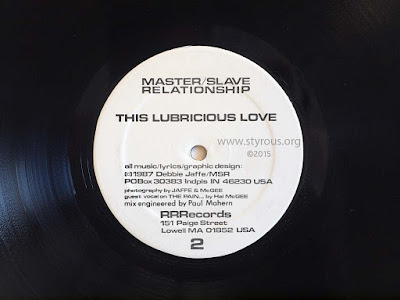 
Master/Slave Relationship ~ This Lubricious Love is for sale on Discogs