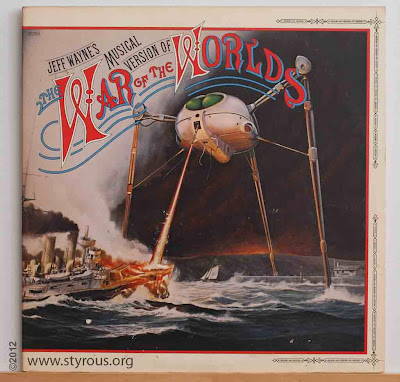 It was 75 years ago tonight, on October 30, 1938, that Orson Wells and his Mercury Theatre actors terrified the nation with their broadcast of a dramatization of the H. G. Wells 1898 novel, The War of the Worlds. It was the most infamous radio broadcasts of all time; delivered as a news bulletin, it sent thousands of people into a panic. By today's standard of lightning-fast communication and multiple sources of information it may seem impossible such a thing can happen but it was a simpler time and such an event really did take place.

Jeff Wayne wrote a progressive rock, with string orchestra, concept album that is an interpretation of the H. G. Wells novel rather than the Orson Wells radio broadcast of The War of the Worlds. The two-disc album was released in 1978. It has sold millions of records around the world; it is the 38th best selling album of all time in the UK with sales of 2,561,286 by 2009. The part of The Journalist was read by Richard Burton and that of the The Artilleryman by David Essex.

The album has a 12" x 12" booklet which is illustrated with paintings by Peter Goodfellow, Geoff Taylor and Michael Trim that effectively illustrate the story from beginning to end. 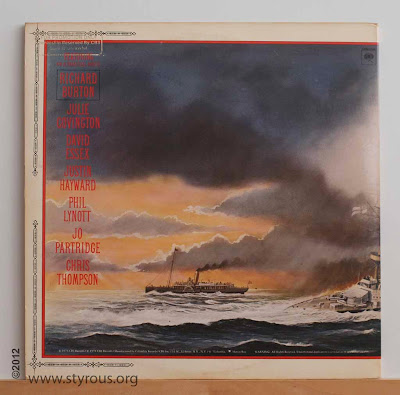 
It is a gatefold album which allows viewing the cover illustration, as well as the two-page interior illustrations, in their entirety. 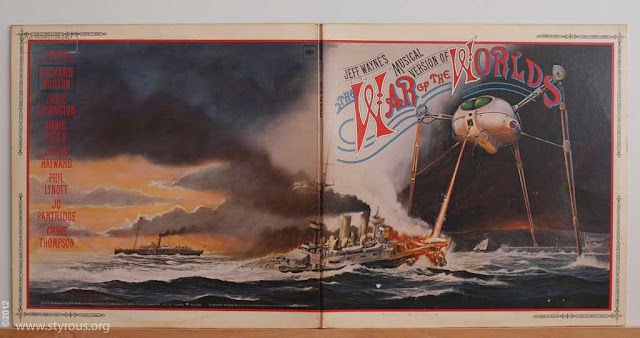 
The intro begins with a monologue by Richard Burton which sets the scene for the invasion by the Martians. Suddenly, a grand orchestra makes a dramatic intro that goes into a fast-paced 9 minute disco melody (it was 1978, the height of the disco craze which was to peak the following year), The Coming of the Martians, an excellent example of what disco could achieve. I remember on hearing it for the first time that it seemed to go on forever (actually, all the music of the work mixes from one leitmotif to the other; there are two discs to the set, so, four sides basically translates to four cuts).

The monologue by Burton continues through the first piece, The Coming of the Martians, to a grand finale which goes right into the next piece, Horsell Common and The Heat Ray. 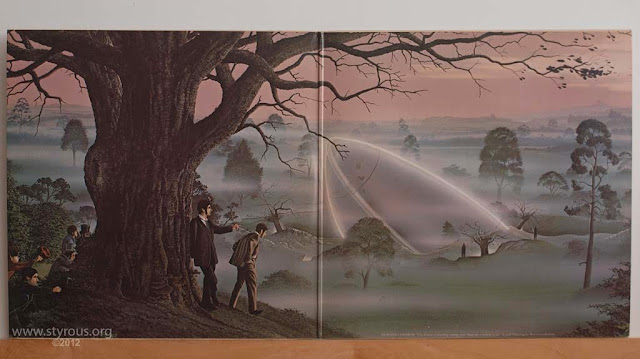 Horsell Common and The Heat Ray is a brilliant piece of suspense music. A quiet echoey, synth introduces a bass guitar which sets the tempo. There is a quiet but ominous sound of heavy metal scraping which is the unscrewing of the hatch of the Martian machine; this leads to a sinister march with great synthesizer effects and dramatic orchestral backing. Somehow, the smooth, mellow marimbas played during the attack by the heat rays (excellently delivered by Jo Partridge) do nothing to make the strident guitars and synths less sinister, a very nice touch.


The Artilleryman and The Fighting Machine continues the story and Richard Burton is joined by David Essex as the Artilleryman and the piercing, eerie, creepy sound of the Martian howl, "OOLA",  is introduced midway through the piece. 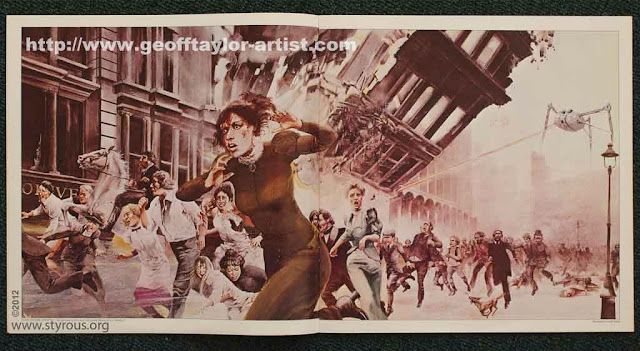 The Red Weed starts with a heartbeat and is slow, quiet and totally weird! It features dissonant, flute-like synths and maybe even a theremin. Midway through, it goes into a great guitar break for a few seconds but goes back to being weird and dramatic. 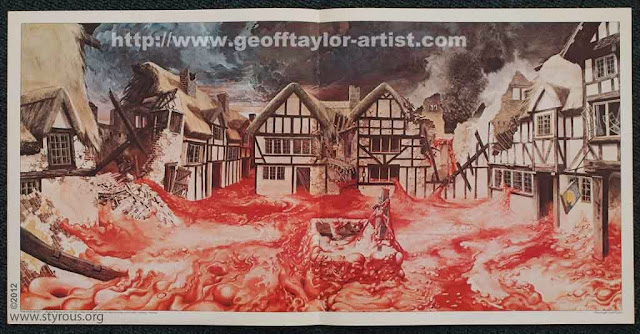 Parson Nathaniel and The Spirit of Man (introduced by Richard Burton and performed by Phil Lynott and Julie Covington) is a dramatically fast but very beautiful orchestral disco treatment. Although it sounds absolutely nothing at all like it, for some reason I can't understand, every time I listen to it it reminds me of I Don't Know How to Love Him from the 1970 concept album by Tim Rice and Andrew Lloyd Webber, Jesus Christ Superstar. The marimbas return sporadically but this time they do their job of calming the tension with their soothing acoustic rolling, just delightful. 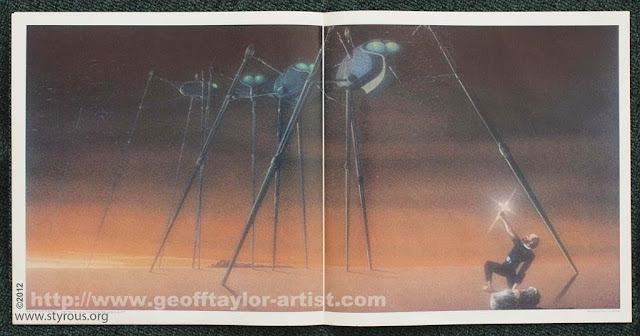 The Artilleryman (David Essex) excitedly tells The Journalist (Richard Burton) of his plans for a Brave New World which paints a dismal future of subterranean living while hiding from the Martians. 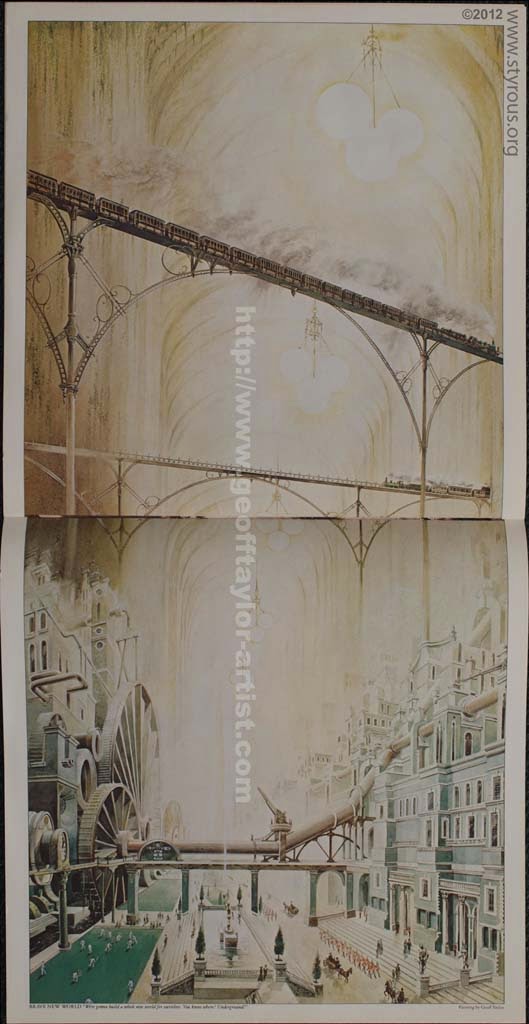 Dead London is a slow, eerie (again) melody with a repetitive piano that builds a base for the swirling synthesizers. It depicts the defeat of the Martians by the simplest of all of Earth's creatures, microbes. 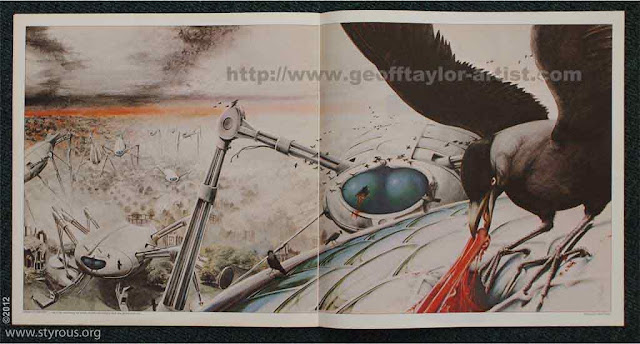 
There was an interesting 1978 Columbia Records promotional film for Jeff Wayne's Musical Version Of The War Of The Worlds (see music links below).

There is a nicely done new version of the work by Wayne called, The War of the Worlds - The New Generation, with Liam Neeson and Gary Barlow taking the parts of The Journalist and The Artilleryman, respectively (see music links below). 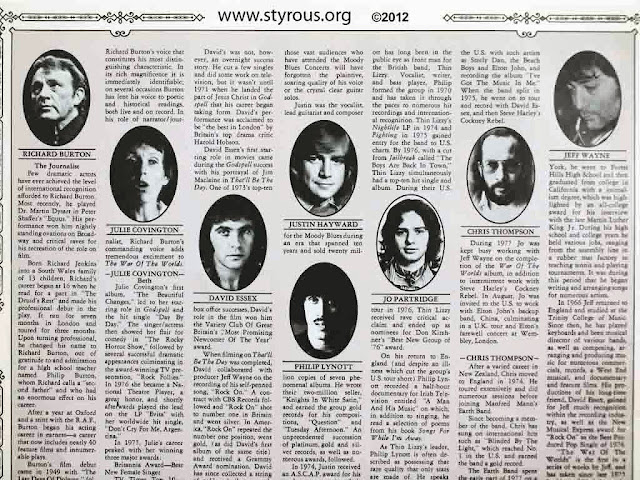 Jeff Wayne ~ The War of the Worlds
cast
photo by Styrous®

All dialogue written by Doreen and Jerry Wayne, based upon H.G. Wells's original text.

All songs written and composed by Jeff Wayne, except where noted.


I enjoyed the album when it first came out in 1978 and I have enjoyed it just as much ever since; I bought the CD version of it a few years back but, as with the case of all recordings transferred to CD, the size of the accompanying brochure lacks the visual impact of the LP.