~
Flag of Guernsey
A few years ago I discovered people on the island of Guernsey were reading my blog (link below) and it got me interested enough to find out about the island. The island has a mixed British-Norman culture, although British cultural influence is stronger, with English being the main language and the Pound sterling its primary currency. The island has a traditional local language known as Guernésiais (link below). 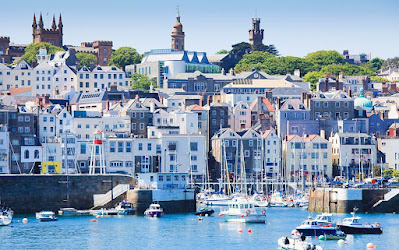 St Peter Port - Guernsey
photographer unknown
And I discovered it has an interesting history.
Around 6000 BC, rising seas created the English Channel and separated the Norman promontories that became the bailiwicks of Guernsey and Jersey from continental Europe. Neolithic farmers then settled on its coast building dolmens found in the islands today, providing evidence of human presence dating back to around 5000 BC. Similar structures are found on the Island of Menorca, one of the Balearic Islands in the Mediterranean Sea belonging to Spain off the coast of Barcelona. 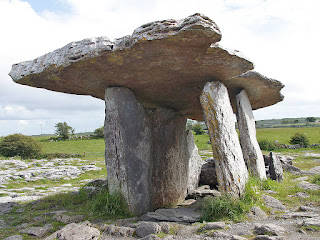 dolmen
photo by Jon Sullivan
Roman settlements on the island, and the discovery of amphorae from the Herculaneum area and Spain indicate an intricate trading network with regional and long-distance trade. Buildings found in La Plaiderie, St Peter Port, dating from 100 to 400 AD appear to be warehouses.
In the late 5th century, Saint Sampson, later the abbot of Dol in Brittany, is credited with the introduction of Christianity to Guernsey. 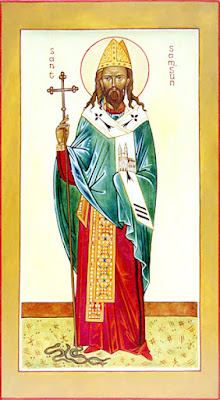 St. Samson de Dol
In 933, the Cotentin Peninsula including Avranchin which included the islands, were placed by the French King Ranulf under the control of William I. The island of Guernsey and the other Channel Islands represent the last remnants of the medieval Duchy of Normandy. In 1204, when King John lost the continental portion of the Duchy to Philip II of France, the islands remained part of the kingdom of England. The islands were then recognised by the 1259 Treaty of Paris as part of the territories of Henry III. 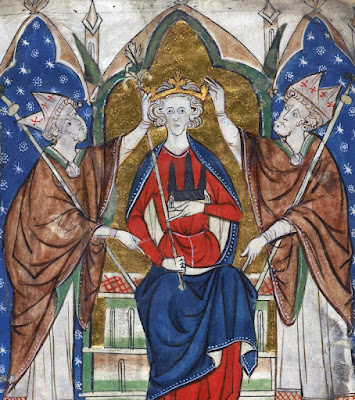 Coronation of Henry III - October 28, 1216
During the Middle Ages, the island was a haven for pirates that would use the "lamping technique" (link below) to ground ships close to the island. This intensified during the Hundred Years War, when, starting in 1339, the island was occupied by the Capetians on several occasions. The Guernsey Militia was first mentioned as operational in 1331 and would help defend the island for a further 600 years.
In 1372, the island was invaded by Aragonese mercenaries under the command of Owain Lawgoch (remembered as Yvon de Galles), who was in the pay of the French king. Owain and his dark-haired mercenaries were later absorbed into Guernsey legend as invading fairies from across the sea and responsible for rings found on the island (links below). 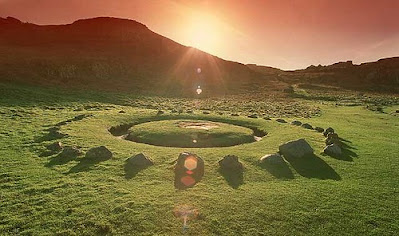 Guernsey fairy ring
photographer unknown
As part of the peace between England and France in 1483, Pope Sixtus IV issued a Papal bull granting the Privilege of Neutrality, by which the Islands, their harbours and seas, as far as the eye can see, were considered neutral territory. A Royal Charter in 1548 confirmed the neutrality. The French attempted to invade Jersey a year later in 1549 but were defeated by the militia. The neutrality lasted another century, until William III of England abolished the privilege due to privateering activity against Dutch ships. 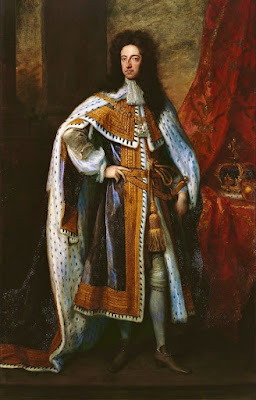 William III of England - 1690
painting by Godfrey Kneller
In the mid-16th century, the island was influenced by Calvinist reformers from Normandy. During the Marian persecutions, three women, the Guernsey Martyrs, were burned at the stake for their Protestant beliefs, along with the infant son of one of the women. The burning of the infant was ordered by Bailiff Hellier Gosselin, with the advice of priests nearby who said the boy should burn due to having inherited moral stain from his mother.
During the English Civil War, Guernsey sided with the Parliamentarians. The allegiance was not total, however; there were a few Royalist uprisings in the southwest of the island, while Castle Cornet was occupied by the Governor, Sir Peter Osborne, and Royalist troops. In December 1651, Castle Cornet was surrendered – the last Royalist outpost anywhere in the British Isles to surrender.
Castle Cornet - ca 1680
painting by Jacob Knyff
By the beginning of the 18th century, Guernsey residents were starting to settle in North America, in particular founding Guernsey County in Ohio in 1810.
The early 19th century saw an increase in the prosperity of the island, due to its success in the global maritime trade, and the rise of the stone industry. Maritime trade suffered a major decline with the move away from sailing craft as materials such as iron and steel were not available on the island.
During the First World War, about 3,000 island men served in the British Expeditionary Force. Of these, about 1,000 served in the Royal Guernsey Light Infantry regiment formed from the Royal Guernsey Militia in 1916.
From 30 June 1940, during the Second World War, the Channel Islands were occupied by German troops. The occupying German forces deported over 1,000 Guernsey residents to camps in southern Germany, notably to the Lager Lindele (Lindele Camp) near Biberach an der Riß and to Oflag VII-C in Laufen.
Guernsey and Jersey were both liberated on 9 May 1945, now celebrated as Liberation Day on the two islands. The German forces surrendered unconditionally aboard the vessel at dawn. British forces landed in St Peter Port shortly afterwards, greeted by crowds of joyous but malnourished islanders singing, amongst other patriotic songs, Sarnia-Cherie, the unofficial anthem of Guernsey (links below).
Viewfinder link:
Guernsey articles/mentons
Guernsey discovers the Viewfinder
Net links:
The Islands of Guernsey ~ Myths and Legends
Pirates Ahoy ~ How Pirates Took Merchant Ships
The Sarnian ~ Fairy Ring
YouTube links:
Guernsey National Anthem
JT Liberation ~ Sarnia Cherie
Space Pirates ~ Sarnia Cherie
Speak Guernésiais
Styrous® ~ Tuesday, December 21, 2021
~
History
MAIN MENU - Blog Articles
~