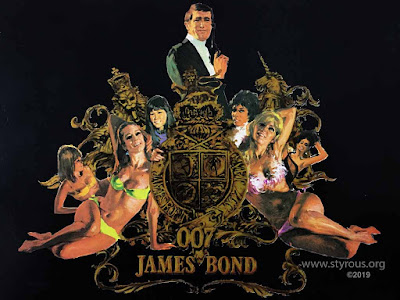 My two favorite actors who portrayed the British spy, James Bond, were  Sean Connery and Daniel Craig. However, my favorite Bond film was On Her Majesty's Secret Service which had neither of them. The James Bond (George Lazenby) love interest in this film was Diana Rigg, an English stage and screen actress whose notable roles were as Emma Peel in the TV series The Avengers and as Olenna Tyrell in Game of Thrones (link below).

I am partial to the film On Her Majesty's Secret Service for a couple of reasons; Rigg was the ONLY Bond woman to actually marry the British spy and the love theme from the film was incredibly beautiful (I'm always a sucker for a pretty tune) (link below). Her Majesty is also considered by many the best of the Bond films (links below). 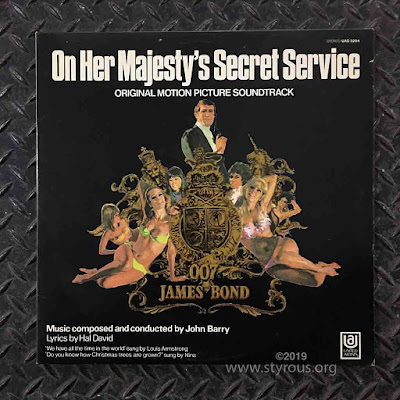 The illustration on the album cover was created by Bob McGinnis who also did the artwork for another Bond film, Thunderball; 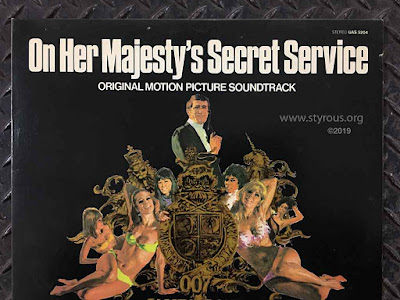 
The love theme, We Have All the Time in the World was composed by John Barry with bittersweet lyrics by Hal David and sung by Louis Armstrong. 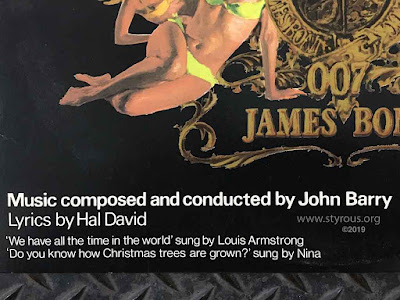 Armstrong was too ill to play his trumpet, therefore it was played by another musician but I can't find out who it was. It was Armstrong's last recorded song (he died of a heart attack two years later), and at the time of release it barely made an impact on the charts.

We have all, the time in the world
Time enough for life, to unfold
All the precious things
Love has in store
We have all the love in the world
If that's all we have, you will find
We need nothing more

Every step of the way
Will find us
With the cares of the world
Far behind us
We have all the time in the world
Just for love
Nothing more, nothing less, only love...

Every step of the way
Will find us
With the cares of the world
Far behind us, yes...

We have all the time in the world
Just for love, nothing more, nothing less, only love...

The song title, We Have All the Time in the World, is taken from Bond's final words in both the novel and the film. Barry chose Armstrong because he felt he could "deliver the title line with irony." When asked for his favorite Bond composition, Barry cited both We Have All... and Goldfinger, sung by Shirley Bassey. Goldfinger because it perfected the "Bond Sound", and We Have All... because it was the finest piece of music he had written for a Bond movie and because of the pleasure of working with Armstrong. " How much time do we have?" :-)

We Have All the Time in the World was covered by My Bloody Valentine (link below) an experimental rock, shoegazing band formed in Dublin in 1983; All the time had not been rediscovered yet as the classic it is now. 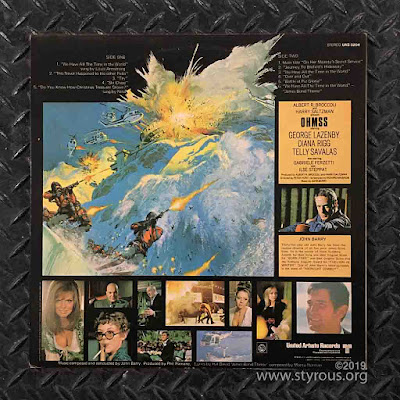 The "James Bond" theme was written by Monty Norman and was used as the opening of two Bond films, Dr. No and On Her Majesty's Secrect Service, as well as several times in other Bond films. 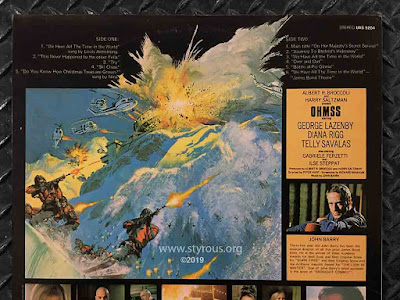 The score for the film was composed by Barry as well as the love song We Have All the Time in the World sung by Louis Armstrong, with lyrics by Hal David, who was regular lyricist for Burt Bacharach. 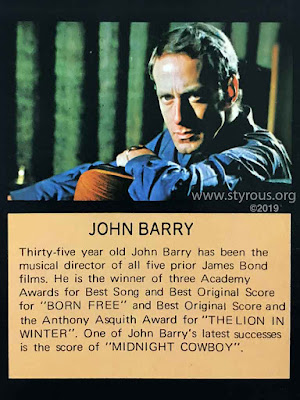 We Have All the Time . . . is often mistakenly referred to as the opening credits theme, when in fact the song is played within the film, during the Bond–Tracy courtship montage, bridging Draco's birthday party in Portugal and Bond's burglary of the Gebrüder Gumbold law office in Bern, Switzerland. 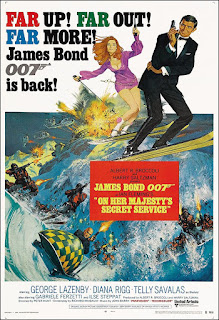 On Her Majesty's Secrect Service poster

Eon Productions, a British film production company, selected an unknown actor and model, George Lazenby, to play the part of James Bond. During the making of the film, Lazenby announced that he would play the role of Bond only once. He rescues a woman, Contessa Teresa "Tracy" di Vicenzo, portrayed by Diana Rigg. 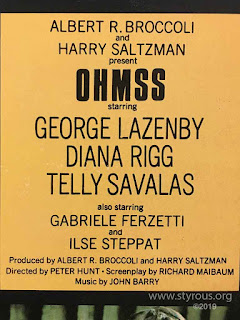 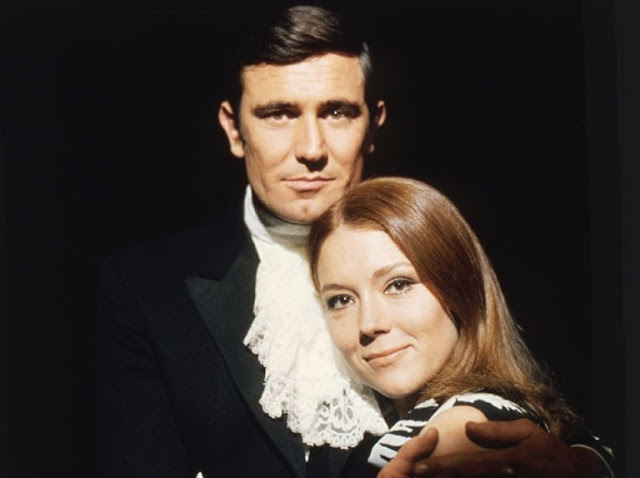 In 1968, after Sean Connery had left the role of James Bond, producer Albert R. Broccoli met George Lazenby for the first time while they were getting their hair cut at the same barbershop. Broccoli offered Lazenby an audition. The position was consolidated when Lazenby accidentally punched a professional wrestler, who was acting as stunt coordinator, in the face, impressing Broccoli with his ability to display aggression. Director Peter R. Hunt later claimed:


"We wanted someone who oozed sexual assurance, and we think this fellow has that. Just wait til the women see him on screen ... I am not saying he is an actor. There is a great deal of difference between an actor and a film star. Didn't they find Gary Cooper when he was an electrician?

By November 1969, and prior to the release of On Her Majesty's Secret Service, Lazenby said he no longer wished to play another James Bond role, saying, "The producers made me feel like I was mindless. They disregarded everything I suggested simply because I hadn't been in the film business like them for about a thousand years."

His co-star Diana Rigg was among many who commented on this decision:


"The role made Sean Connery a millionaire. It made Sean Connery ... I truly don't know what's happening in George's mind so I can only speak of my reaction. I think it's a pretty foolish move. I think if he can bear to do an apprenticeship, which everybody in this business has to do – has to do – then he should do it quietly and with humility. Everybody has to do it. There are few instant successes in the film business. And the instant successes one usually associates with somebody who is willing to learn anyway."

Rigg was also quoted as saying, "I can no longer cater for his obsession with himself. He is utterly, unbelievably ... bloody impossible". 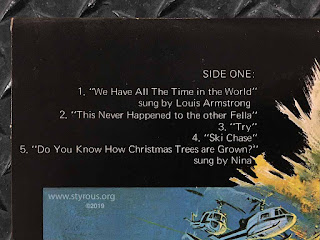 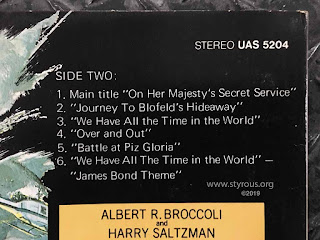 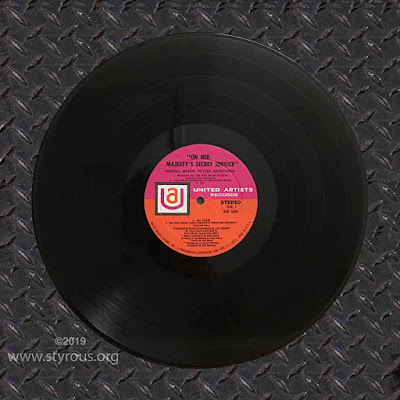 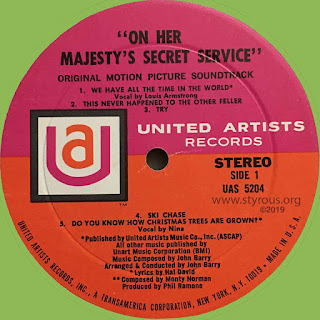 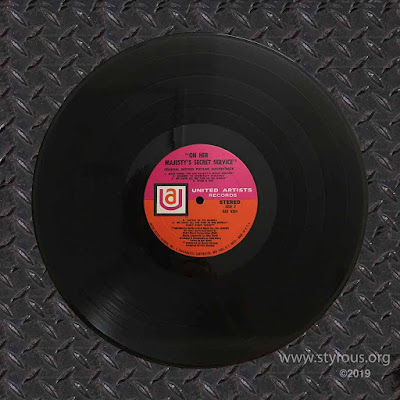 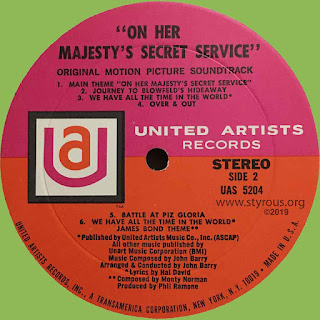 Label Variant
-Title split in two lines, "On Her Majesty's" "Secret Service"
-Track times are listed
-Different font and arrangement
-Does not have Phil Ramone production credit on labels
-Spelling of tracks A2 and B2 differ on cover
Barcode and Other Identifiers