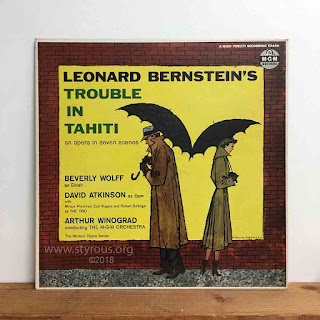 Leonard Bernstein was born one hundred years ago on August 25, 1918. As it is the centennial of his birth, there will be thousands of memorials to him; this is one of them.

He was an American composer, conductor, author, music lecturer, and pianist. He was among the first conductors born and educated in the US to receive worldwide acclaim. According to music critic Donal Henahan, he was "one of the most prodigiously talented and successful musicians in American history."

Bernstein conducting a rehearsal in one of the Tanglewood barns, ca 1971
(Photograph by Heinz Weissenstein, Whitestone Photo, BSO Archives)

For my tribute to Bernstein, I've selected a beautiful, very small and almost unknown gem of an opera he wrote in 1952, his first, Trouble in Tahiti. I have loved it since I first heard this 1953 recording in the late fifties. It is a one-act opera in seven scenes composed by Bernstein with an English libretto by him; he dedicated the opera to Marc Blitzstein. There is a superb video of a complete performance of the opera by the English group, Opera North, on YouTube (link below) that is well worth the time (51 minutes) to watch. 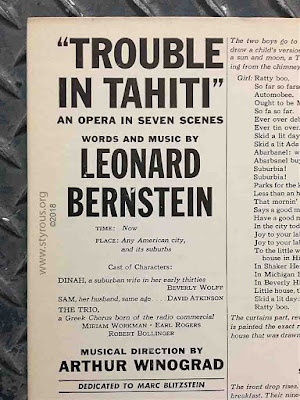 
Tihiti is the darkest of his "musicals", and the only one for which he wrote the words as well as the music. The opera received its first performance on June 12, 1952 at the Bernstein Festival of the Creative Arts on the campus of Brandeis University in Waltham, Massachusetts to an audience of nearly 3,000 people. 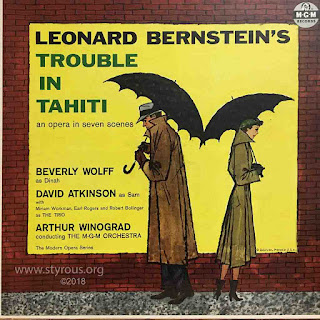 During the post–World War II economic expansion of the late 1940s and the 1950s, many persons from rural and urban backgrounds moved to single-family detached homes in the suburbs or in "horizontally developed cities". 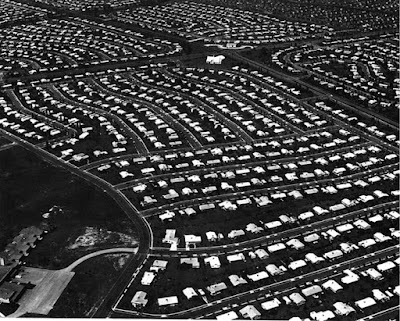 The early to middle fifties was a time when it was dawning on people that Suburbia and the suburban "Leave It To Beaver" existence was not what it was all cracked up to be. It was a time of transition from a major world power and prestige to something a bit less that lead to the disillusionment of the sixties. 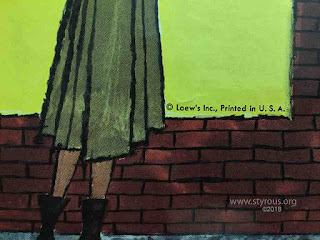 
Trouble predates the 1956 book by John Keats, The Crack In the Picture Window. It was not uncommon for some of these homes to have a picture window, in contrast to the smaller sash windows typical of urban and rural housing; although many of these new suburban homes did not necessarily have picture windows, Keats in his title used the term to characterize this new housing in general, and by extension the new social forms arising from this change in how people housed themselves (as well as other social changes of the time).

It also predates the song by Malvina Reynolds, Little Boxes, which was a big hit for Pete Seeger in 1963. The song is a political satire about the development of suburbia, and associated conformist middle-class attitudes. The effectiveness of the satire was attested to by a university professor quoted in 1964 in Time magazine as saying, "I've been lecturing my classes about middle-class conformity for a whole semester. Here's a song that says it all in 1½ minutes." However, according to Christopher Hitchens, satirist Tom Lehrer described Little Boxes as "the most sanctimonious song ever written". 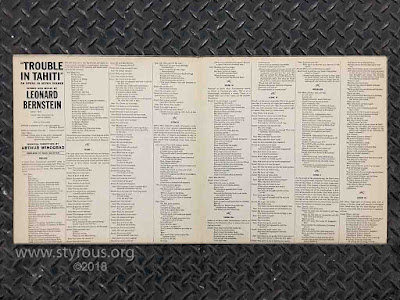 Trouble in Tahiti is the story of a disintegrating middle-class suburban marriage and it was startling that it appeared at that prosperous time in the history of the US.

The opera is performed with minimal scenery (although Bernstein gave detailed instructions for drops and props) and very simple costumes. There are only two soloists, a married couple named Sam (baritone) David Atkinson,  and Dinah (mezzo-soprano), Beverly Wolff. Their son, Junior, is referred to but is never seen or heard (however, the video version I've linked to below does have a "Junior"). Other characters are addressed in certain scenes but also are never seen or heard: Sam's client Mr Partridge (on the telephone); his friend Bill (present and interacting with Sam but intended to be invisible); his secretary Miss Brown (present but intended to be invisible); Dinah's psychoanalyst ("invisible"); her milliner ("imaginary"). 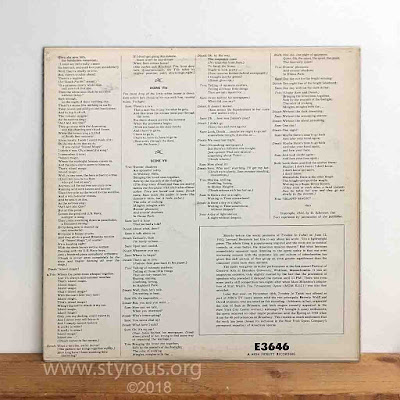 The plot is of one day in the life of these desperately unhappy, though married people, lonely, longing for love, and unable to communicate. It is is about emotional isolation in the suburbs. This is a couple that has everything they could ever need; but they have lost themselves and one another.

A trio, two men and a woman, perform the function of the "Greek Chorus" throughout the opera, happily but cynically extolling the virtues of Suberbia and Sam, the hopeless frustration of Dinah and helps propel the action. They open with: Daa/Daa, Day, a delightful, bouncing diddy that blissfully extolls the joys of suburban life with the innocence of the above mentioned Leave It To Beaver but there is an underlying current with a bite to it (link to lyrics & music below).

We're taken to Sam's day at the bank in his office where we see his shallow dealings with his clients; the trio sings of his "marvelous/generous" handling of them.

In one scene, Dinah tells her psychiatrist about a dream she had, There Is a Garden (13 minutes into the complete version below). In the dream, she is in a dead garden but a voice tells her there is another one filled with "love, harmony, and grace." She tries to find the voice, but every step she takes is filled with terror and horrible things. Finally, she finds the owner of the voice, but when she touches his hand, he vanishes and she wakes. The aria is one of the most brilliant works in modern opera as it fluctuates between moments of agonizing emotional turmoil and incredibly beautiful melody (link below). To me it is the highlight of the opera. It is magnificent!

After her appointment, Sam and Dinah accidentally encounter each other on the street, Well, of all people Duet (link Below), a variation on the Garden motif, but end up walking off in opposite directions. It is a sad and grim encounter. 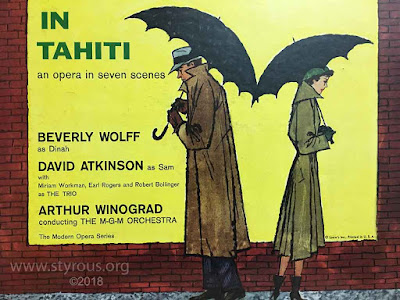 At the gym, Sam sings about the natural superiority of some men, There's a Law, and how they "always will win" while the rest are just losers; he, of course, is one of the winners. He sings about physical superiority but you know he is referring to superiority on other levels (link below).

Dinah goes to see a movie, Trouble in Tahiti, from which the title of the opera is derived, and is a metaphor for what is happening in her life but she does not acknowledge this. Afterwards, at the milliner, Dinah sings about the sillyness of the film, What a Movie; it is a rollicking, silly and delightful segement but at the end in her heart she must know it strikes too close to home (link below).

At the end of the opera, Sam and Dinah show a willingness to sacrifice for each other, out of commitment to the marriage, but there seems to be no joy in it.

The theme of modern familial disillusionment was revisited by Bernstein years later in 1983 with his sequal to Trouble, A Quiet Place (link below), with a libretto by Stephen Wadsworth. It tells the story of a contemporary American family struggling to connect, forgive, and accept one another's differences. 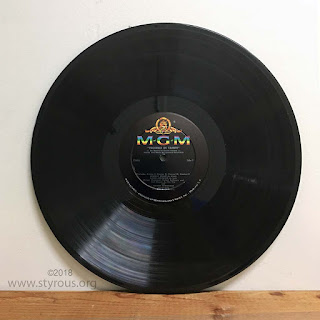 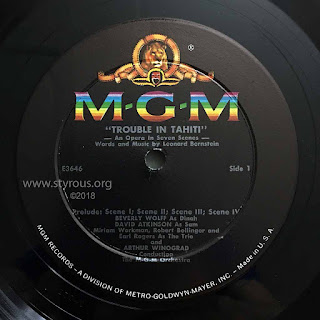 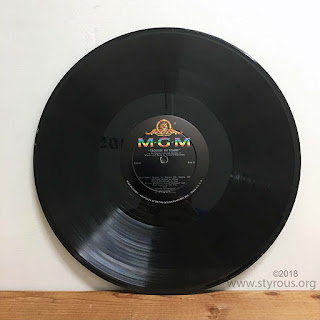 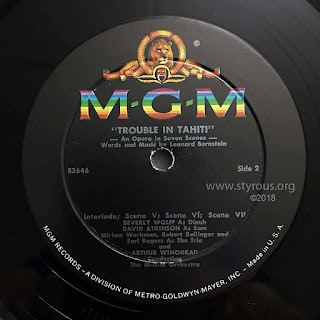 A Quiet Place
Opera North Grand Theatre
YouTube links:
Trouble In Tahiti (complete - 51:04)
- Prelude ("Doa--Daa--Day--Day"), Scene 1 and 2
- There Is a Garden (9:04)
- Well, of all people Duet
- Gym scene - There's a law
- Scene 6 ("What a Movie!...Island Magic")
- Final scene
The Girl Choir of South Florida ~ There Is a Garden
Trouble in Tahiti ~ Quirijn de Lang interview
Leonard Bernstein on A Quiet Place 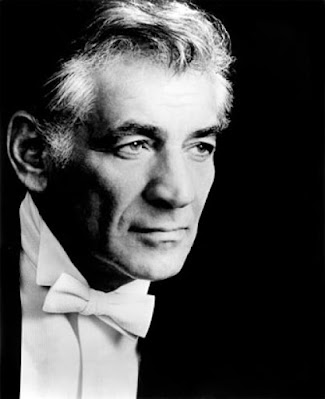