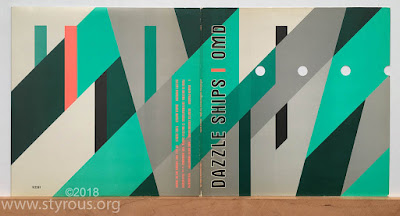 Today, February 27, is the birthday of Paul Humphreys, one of the founders of the electronic New Wave group, Orchestral Manoeuvres in the Dark (OMD). For this event I've chosen one of my favorite albums by OMD, Dazzle Ships (1983).

Although I've known the title and cover art (designed by Peter Saville) reference a painting by Vorticist artist Edward Wadsworth, which painting I didn't know. I was recently informed by Lon Clark the painting, titled Dazzle-ships in Drydock at Liverpool, was based in turn on dazzle camouflage (link below). Dazzle-ships in Drydock, is in the collection of the National Art Gallery of Canada in Ottawa, Canada. 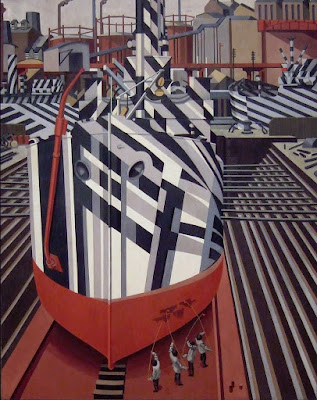 What a mind-blower that was! Dazzle camouflage, also known as razzle dazzle (in the U.S.) or dazzle painting, was a family of ship camouflage used extensively in World War I, and to a lesser extent in World War II and afterwards. Credited to the British marine artist Norman Wilkinson, though with a it consisted of complex patterns of geometric shapes in contrasting colours, interrupting and intersecting each other (link below).

The music is divided into "time zones"; this is reflected in the physical graphic design of the gatefold, die-cut album cover in the British issue (this recording) but not the US pressing. There are die-cuts, holes, punched into the appropriate locations on the map of the world on the interior of the gatefold album. 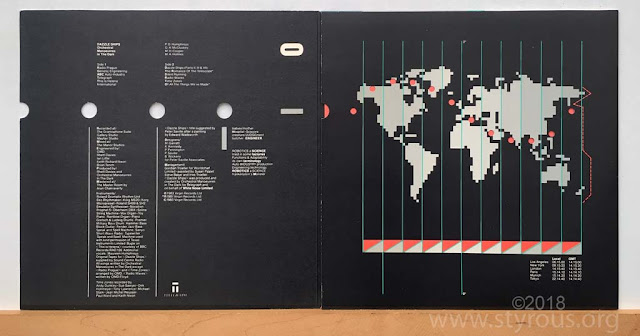 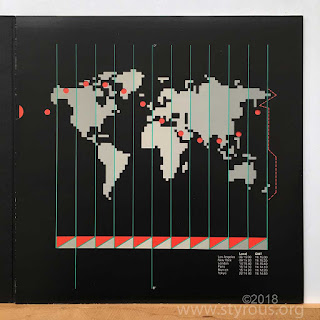 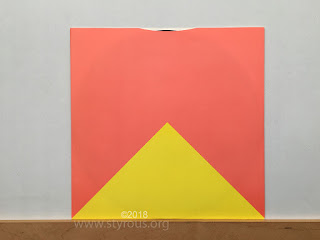 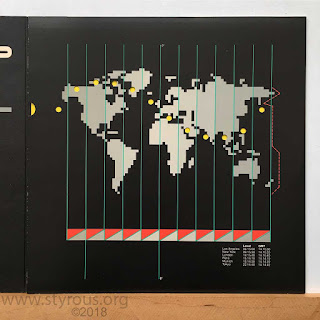 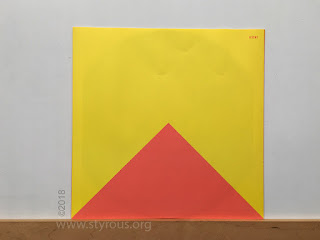 Dazzle Ships is the fourth album by Orchestral Manoeuvres in the Dark (OMD), released in 1983. The title and cover art (designed by Peter Saville) allude to a painting by Vorticist artist Edward Wadsworth based on dazzle camouflage, titled Dazzle-ships in Drydock at Liverpool.

Dazzle Ships had six conventional pop songs, up-tempo numbers and ballads. Two of them, The Romance of the Telescope and Of All the Things We've Made were remixed versions of songs previously issued on B-sides to earlier singles (on the Joan of Arc single, The Romance of the Telescope was described as "unfinished"). Radio Waves, not to be confused with the Roger Waters song by the same name, was a new version of a song from McCluskey and The Id, the pre-OMD band Paul Humphreys played in. Two singles were released from the album, Genetic Engineering and Telegraph, which achieved moderate chart success in the United Kingdom and on American rock and college radio. Both were also released as 7" vinyl picture discs.

My favorite song on the album was not one of the "hits", of course. It is Silent Running, not to be confused with the film nor the song by Mike and the Mechanics. Running is very short but very beautiful (YouTube link below).

A terrific dance song is the energetic, Telegraph. It starts quietly and tinkly then bursts into a fast as a speeding train tempo.

Of All the Things We've Made is a great song to be danced to fast or slow depending on who you're with and how you're feeling. 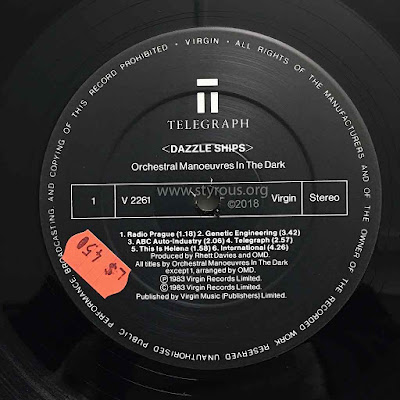 Dazzle Ships was the follow-up release to the band's hugely successful Architecture & Morality (1981). OMD, then at their peak of popularity, opted for a major departure in sound on the record, shunning any commercial obligation to duplicate their previous LP. The album is noted for its experimental content, particularly musique concrète sound collages, and the use of shortwave radio recordings to explore Cold War and Eastern Bloc themes.

It's these typewriter, experimental, shortwave radio signals, etc., sounds that make this album so interesting on so many levels. McCluskey has said, "We wanted to be ABBA and Stockhausen. The machinery, bones and humanity were juxtaposed." They did an excellent job on that score!

The Radio Prague track is the actual interval signal of the Czechoslovak Radio foreign service, including the time signal and station ID spoken in Czech. Time Zones is a montage of various speaking clocks from around the world. Neither Radio Prague nor Time Zones carry any writing credit at all, with OMD being credited only for arranging the tracks. The tracks This Is Helena, ABC Auto-Industry and International also include parts of some broadcasts recorded off-air (a presenter introducing herself, economic bulletin and news, respectively). The track Genetic Engineering is an homage to Kraftwerk, with the vocal arrangement drawing heavily on the structure employed on their track Computer World from the album of the same. 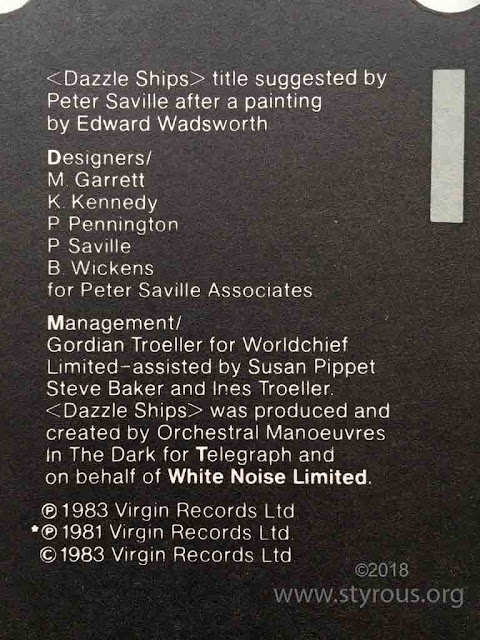 Most of the reviews of the time were unfavorable, however, Maxim Jakubowski acknowledged that a few of the tracks "recapture the melancholy brilliance of the past". More forgiving was the Melody Maker article by Paul Colbert, who wrote that "as an album from start to finish it's a challenge and a reward". Reviewer Johnny Black in Smash Hits hailed the new musical direction saying, "the songs are waiting to be found and are as melodic, passionate and vital as ever". Right on!

The record peaked at #5 on the UK Albums Chart and remained in the top 20 for six weeks (rising from #19 to #16 in its second-to-last week), and achieved sales of 300,000 copies. It was deemed a flop in comparison to multi-million selling predecessor Architecture & Morality (1981), which prompted OMD to move in a more conservative musical direction on future releases. This is a shame as the experiments in this album indicate that there might have been exciting an innovative work to come.

Musician and music journalist Bob Stanley commented on its limited impact: "[It] contained no obvious hits and soundtracked the cold war at its coldest... Orchestral Manoeuvres in the Dark's Dazzle Ships came to be viewed as a heroic failure – the ultimate commercial suicide."

The LP has garnered positive retrospective appraisals from publications such as Record Collector, The A.V. Club, Q and The Quietus, among others. John Bergstrom of PopMatters said the album "is rightly considered a lost classic". Pitchfork journalist Tom Ewing wrote: "Luckily, you don't need a contrarian streak to love it... history has done its own remix job on Dazzle Ships, and the result is a richer, more unified album than anyone in 1983 could have imagined." Ned Raggett in AllMusic said the record "beats Kraftwerk at their own game", and described it as "dazzling indeed"; he and colleague David Jeffries hailed the album as a "masterpiece"—an opinion echoed by numerous critics. DIY writer Gareth Ware said: "Like a strange piece of modernist architecture, it's a collection of awkward, jagged polygons which come together to form a cohesive mass at the last possible moment... [Dazzle Ships] demands attention."

It's important to keep your eye on the target but like a Vorticist painting, Dazzle ships made everyone miss their mark! 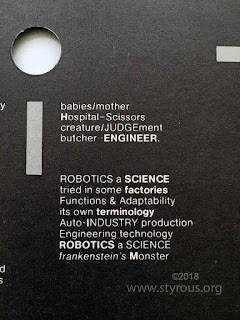 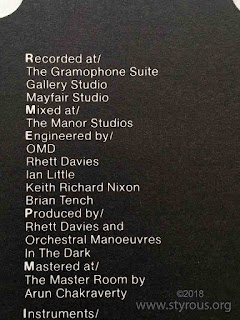 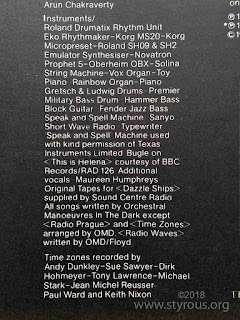 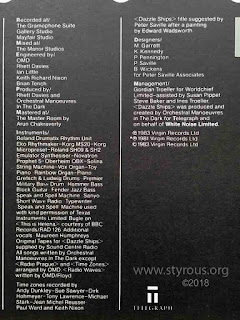 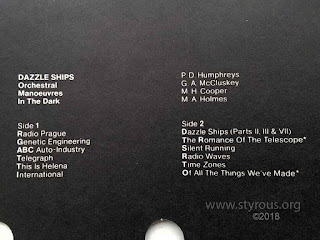 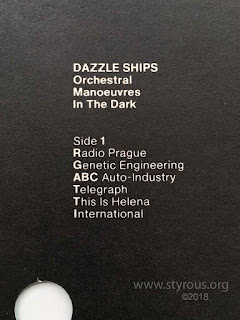 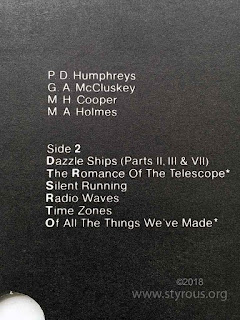 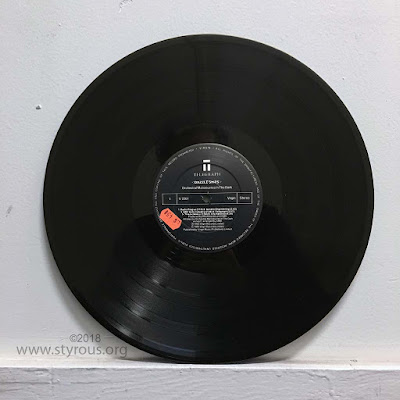 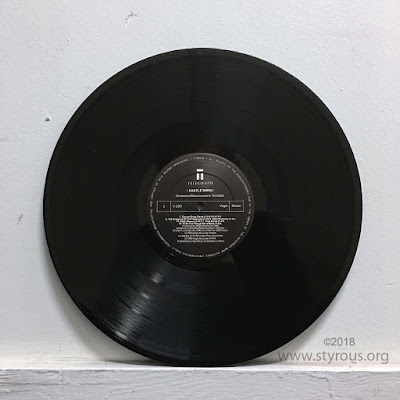 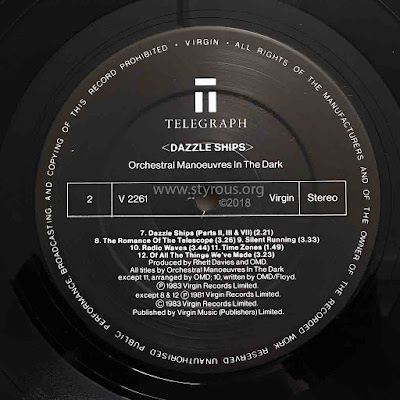 Recorded at The Gramophone Suite, Gallery Studio, Mayfair Studio.
Mixed at The Manor Studios.
Mastered at The Master Room.

"Dazzle Ships" title suggested by Peter Saville after a painting by Edward Wadsworth.

Comes in a die-cut gatefold sleeve with pink and yellow inner sleeve.
Barcode and Other Identifiers