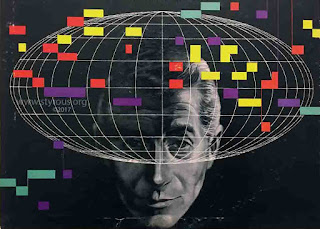 Stanley Newcomb "Stan" Kenton died on this date, August 25, in 1979. He was an award winning and internationally recognized American popular music and jazz artist. As a pianist, composer, arranger, and band leader, he led an innovative and influential jazz orchestra (1940s through '70s) garnering successes across several music genres. Though Kenton was to have several pop hits from the early 1940s into the 1960s, much like earlier band leader Paul Whiteman, he categorized his music as forward looking. In Kenton's own words it was "Progressive jazz." He was also on the cutting edge of jazz education in creating the Stan Kenton Band Clinics starting in the late 1950's. 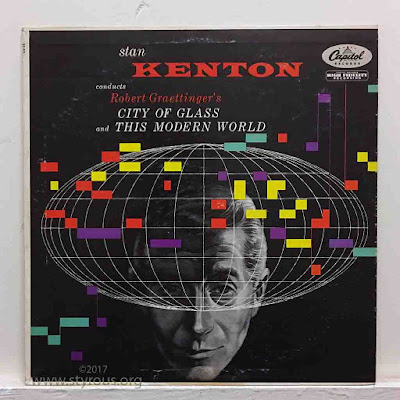 
City of Glass, was originally issued as a 10" LP album in 1951 and consists entirely of the music of Bob Graettinger. To me, this album is the epitome of the 50's "Progressive jazz" sound of a full jazz orchestra; a dissonant, raucous yet severely structured work. 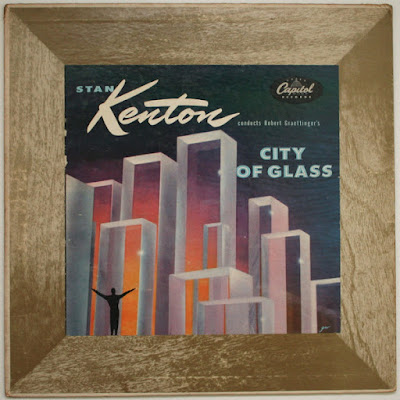 In 1953, This Modern World was released, it also featured performances of compositions by Robert Graettinger recorded between 1951 and 1953 and originally released as a 10-inch LP on Capitol as well as a set of three 7 inch 45 rpm singles.

The recording I have is a 1956 re-issue that includes both of the City of Glass and This Modern World albums. Unfortunately, it was recorded before the age of stereo (link below) so, it is a monaural recording. 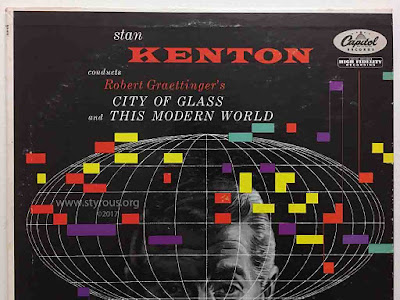 After World War II in Europe and the United States there was a period of artistic experimentalism. Like the period in France after the Franco-Prussian War (Impressionism) and in the late 19th century, the pre/post World War I period of (Expressionism), the post World War I period of Modernism was no different with composers trying to 'write music for the sake of music' and not attaching it to a social meaning or meant for a social cause (see Darmstadt School).

The LP, City of Glass, and the whole body of work from the Stan Kenton orchestra and Robert Graettinger (1947–1953) is a direct product of the experimental American music scene of the post World War II era. Though overshadowed historically by other compositional endeavours in jazz at the time, Graettinger and City of Glass is important in the progress that was to be part of Third Stream jazz; a term coined in 1957 by composer Gunther Schuller to describe a musical genre that is a synthesis of classical music and jazz. Schuller insisted that "by definition there is no such thing as 'Third Stream Jazz'" (link below). 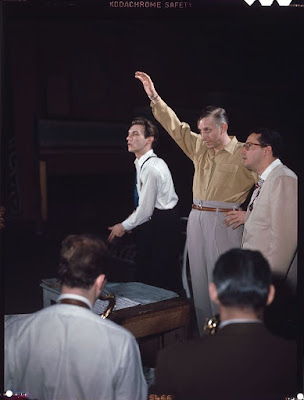 Stan Kenton was born on December 15, 1911, in Wichita, Kansas. In 1924, the family moved to Southern California in the Los Angeles region where he grew up. Kenton started learning piano as a teen from a local pianist and organist, Frank Hurst. In high school at about the age of 15, the pianist and arranger Ralph Yaw introduced him to the music of Louis Armstrong and Earl Hines. 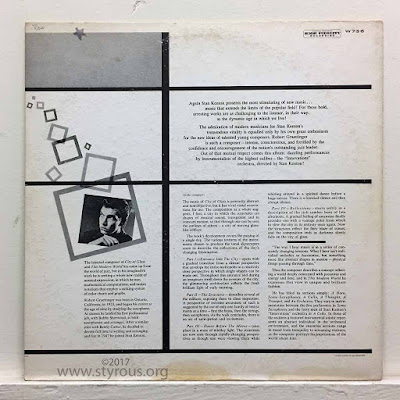 At 16 he was already playing a regular solo piano gig at a local hamburger eatery for 50 cents a night plus tips; during that time he had his own performing group named "The Bell-Tones." His first arrangement was written during this time for a local, eight piece band who played in nearby Long Beach. 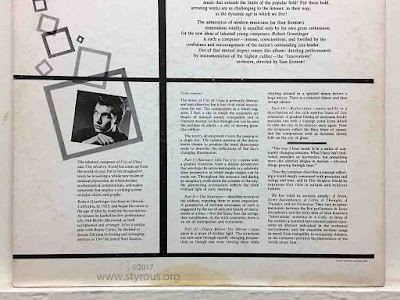 While still in his late teens Kenton toured as a member of several local groups from Southern California. He first got his notable professional work during the 1930s, first with in the dance band of Everett Hoagland in 1934. Kenton would later compliment Hoagland on his leadership skills and what he had learned from being his band. "I played with Everett for about a year and a half,and I know that of the things I applied to my own bands in later years I can trace back to the schooling I received from Everett Hoagland." 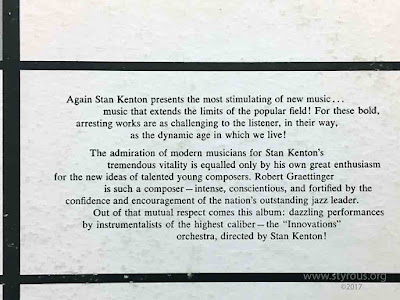 In June of 1941, Kenton formed his first orchestra, which later he named after his theme song "Artistry in Rhythm". Kenton worked in the early days with his own groups as much more of an arranger than a mainstay, featured pianist. Although there were no name musicians in his first band (with the possible exception of bassist Howard Rumsey and trumpeter Chico Alvarez), Kenton spent the summer of 1941 playing regularly before an audience at the Rendezvous Ballroom in Balboa Beach, CA. Influenced by Jimmie Lunceford (who, like Kenton, featured high-note trumpeters and thick-toned tenors), the Stan Kenton Orchestra struggled for a time after its initial success. Its Decca recordings were not big sellers and a stint as Bob Hope's backup radio band during the 1943–44 season was an unhappy experience; Les Brown permanently took Kenton's place. 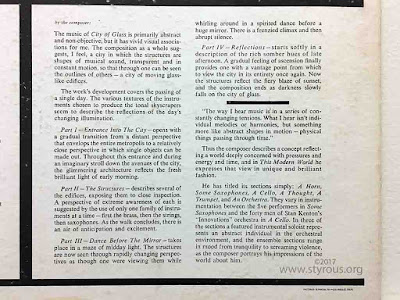 
Kenton's first appearance in New York was in February 1942 at the Roseland Ballroom, with the marquee featuring an endorsement by Fred Astaire. By late 1943, with a contract with the newly formed Capitol Records, a popular record in Eager Beaver, and growing recognition, the Stan Kenton Orchestra was gradually catching on; it developed into one of the best-known West Coast ensembles of the 1940s. Its soloists during the war years included Art Pepper, briefly Stan Getz, altoist Boots Mussulli, and singer Anita O'Day. In the mid-1940s, Kenton's band and style became known as the "wall of sound" or "wall of brass". 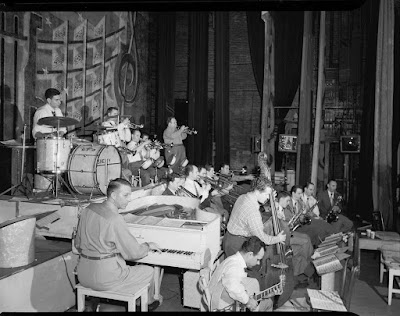 This overall period of the Kenton orchestra starting in 1947 (1947–1953), was the most innovative and fertile in terms of purely artistic output. In 1950 Kenton finally put together the large, 39-piece Innovations in Modern Music Orchestra that included 16 strings, a woodwind section, and two French horns. The music was an extension of the works composed and recorded since 1947 in by Bob Graettinger, Manny Albam, Franklyn Marks and others. Name jazz musicians such as Maynard Ferguson, Shorty Rogers, Milt Bernhart, John Graas, Art Pepper, Bud Shank, Bob Cooper, Laurindo Almeida, Shelly Manne, and June Christy were part of the groups. 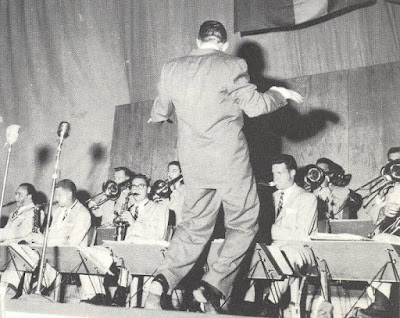 Kenton reformed the band in 1951 to a much more standard instrumentation: 5 saxes, 5 trombones, 5 trumpets, piano, guitar, bass, drums. One of the standout projects and recordings for the mid-1950's band is the Cuban Fire! album released in 1956. It will be the subject of a future Viewfinder blog article. 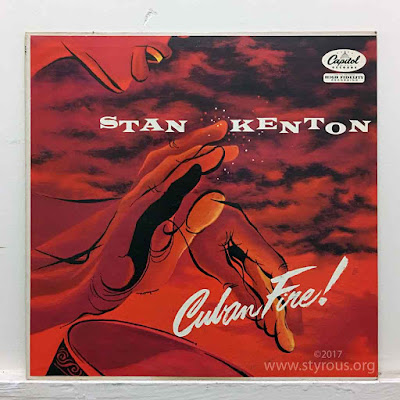 The Kenton orchestra had been on a slow decline in sales and popularity in the late 1950s with having to compete with newer popular music artists such as Elvis Presley, Bobby Darin and The Platters. The height of this decline was around 1958 and coincided with a recession that was effecting the entire country. There were far fewer big bands on the road and live music venues were hard to book for the Kenton orchestra. The band would end 1959 beaten up by poor attendance at concerts and having to rely far more on dance halls than real jazz concerts. The band would reform in 1960 with a new look and new sound, this was larger group with a 'mellophonium' section added and part of an upsurge in Kenton's popularity. 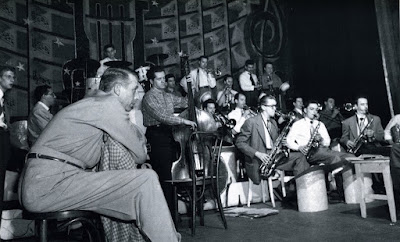 
Kenton continued leading and touring with his big band up to his final performance in August 1978. In June 1973 Bob Curnow had started as the new artists and repertoire manager overseeing the whole operation of the Creative World Records. It was just the year before (in 1972) the Kenton orchestra recorded the National Anthems of the World double LP with 40 arrangements all done by Curnow. 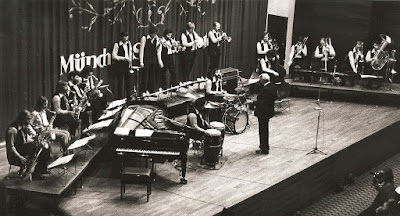 
The Kenton Orchestra from 1960-1963 had very key successes; the band had a relentless recording schedule. The albums Kenton's West Side Story (arrangements by Johnny Richards) and Adventures In Jazz, each won Grammy awards in 1962 and 1963 respectively. His West Side Story will be a future article on the Viewfinder. 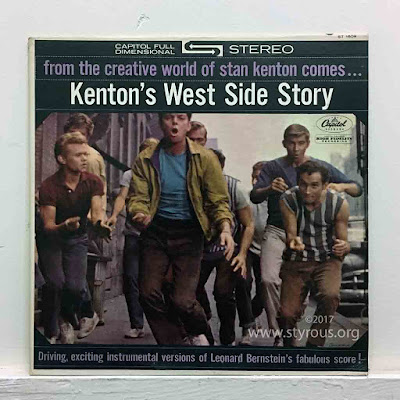 Kenton had ties from earlier writing of country/western songs that were a success with Capitol and again he tried his hand in that genre during the early 1960s. In a music market that was becoming increasingly tight, in 1962 he cut the hit single Mama Sang a Song (link below); his last US Top-40 (No. 32 Billboard, No. 22 Music Vendor). The song was a narration written by country singer Bill Anderson and spoken by Kenton. The single also received a Grammy nomination the following year in the Best Documentary or Spoken Word Recording category. 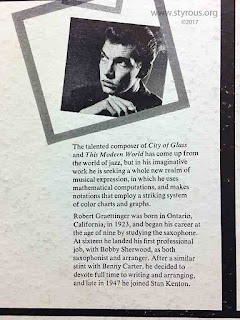 Kenton had two accidental falls; one in the early 1970s and then again in fall in 1977 while on tour in Reading, PA. The second fall was very serious as he fractured his skull. The last two years of his life became far more physically challenging for Kenton from the effects of the two accidents. On August 17, 1979 he was admitted to Midway Hospital near his home in Los Angeles after a stroke; eight days later on August 25th he died. He was 67 years old. 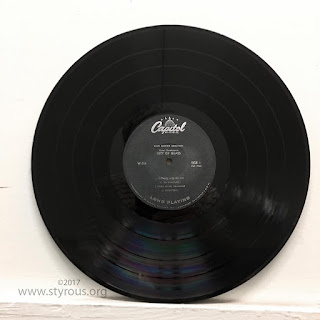 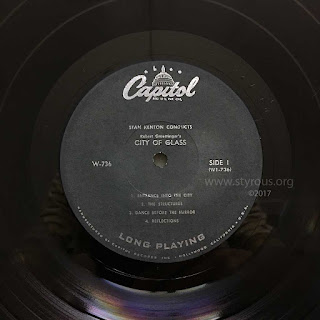 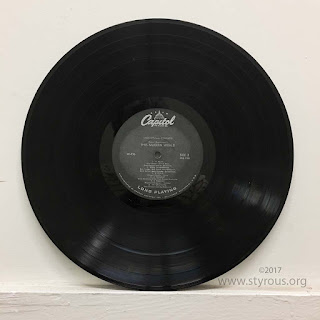 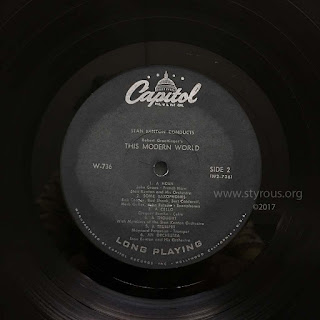 B4 - A Thought, Performer [Selected Members] –Stan Kenton And His Orchestra

B6 - An Orchestra, Performer – Stan Kenton And His Orchestra

title variations Side A "City Of Glass"
- rear cover: Part I - Entrance Into The City / Part II - The Structures / Part III - Dancre Before The Mirror / Part IV - Reflections
- Center label : same without Part I to IV
Barcode and Other Identifiers 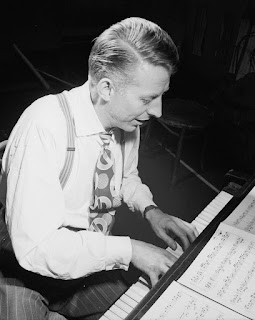