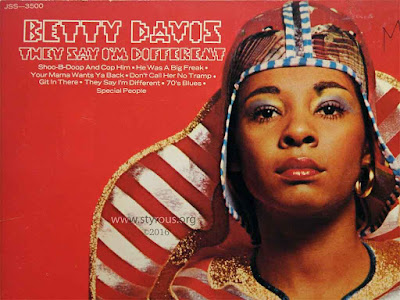 Many albums have influenced my life, one way or another. They Say I'm Different was THE most influential album in a massive way. I know, that sounds like an exaggeration; but in no way is this an overstatement. I have been wanting to write about it since I started the Vinyl LP series (link below) but because of its significance in my life I wanted it to be right. After mulling it over for the last couple of years I feel I'm ready to have at it now.

Actually, it is not so much the album but the cover that had such a profound effect on my career and where it went a few years after I bought it. A hint as to its impact on me is that my copy of the album has been signed by Kaisik Wong, the designer of the costume Davis is wearing (link below). 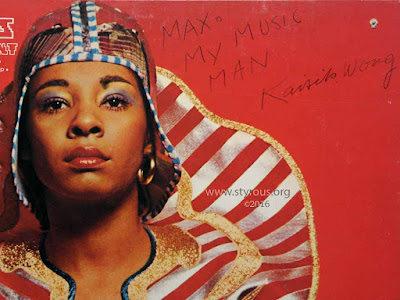 This is my favorite funk/pre-disco album of all time. It is moderately slow funk at its very best; turn down the lights and it sets up a mood for the discriminating dancing fool. I enjoyed it for several years before I met Wong. The Wire (magazine) placed They Say I'm Different in their list of  "100 Records That Set the World on Fire (While No One Was Listening)". And that seems to sum up what happened with this talented woman.

They Say I'm Different is a gatefold album so along with full credits, the costume is displayed in all its glory. It is the second studio album by Betty Davis released in 1974. As well as singing, Davis wrote the songs and produced the album.

The cover design is by Ron Levine; the art direction by Bill Levy. As mentioned earlier, the costume was designed by "Kai" (Kaisik Wong). The album was recorded at the Record Plant in Sausalito, California. 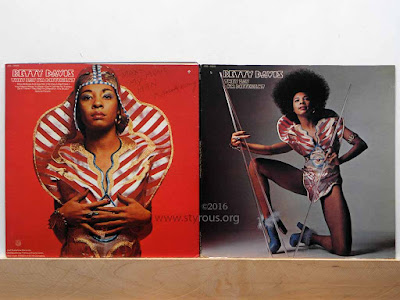 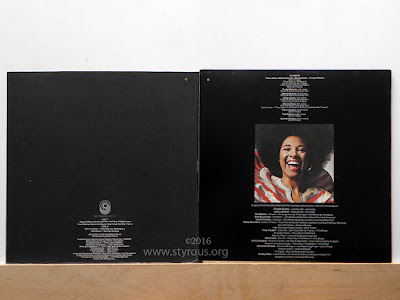 
The lineup on the album is stellar. Pete Escovedo plays timbales and Buddy Miles along with Merl Saunders soar into heavenly heights on guitar. Hershall Kennedy and Tony Vaughn, both of Graham Central Station, are amazing with clavinet, acoustic piano and trumpet on their respective songs. Amazing! The total is far beyond the individual parts. 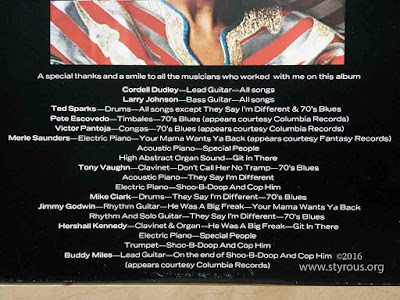 
The back up vocals are amazing! These include: Elaine Clark of The Voices of East Harlem, Ted Sparks (also backup singer for Natalie Cole and Keni Burke, the Five Stairsteps) and Cordell Dudley who toured with the George Clinton superstar band, Parliament-Funkadelic. 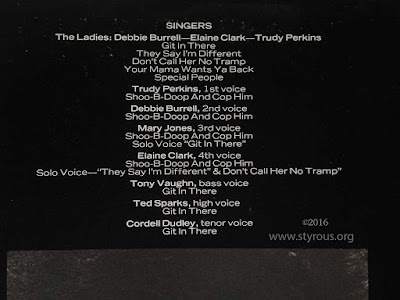 With every album I have favorites. On this one it's They Say I'm Different, He Was a Big Freak and 70's Blues; some for the musical elements, some for the lyrics; Different and Freak are the very best you can find for A-Class, get-down, "Dirty Dancing". 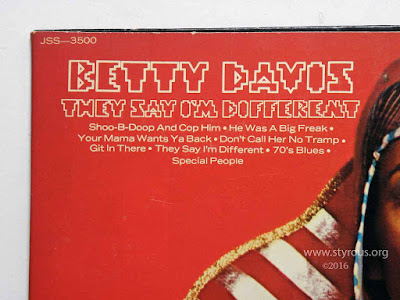 
They Say I'm Different is a moderately slow, sensual song with some wicked guitar work by Jimmy Godwin backed up by Cordell Dudley on lead guitar and Larry Johnson, bass. Tony Vaughn plays a great acoustic piano and Mike Clark builds the foundation with some nice drum work (links to music & lyrics below). 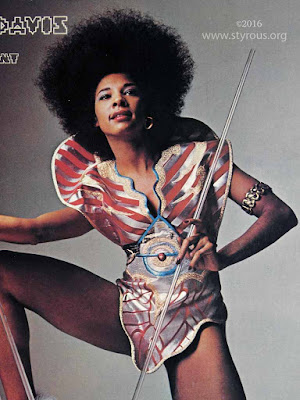 He Was A Big Freak literally dances on the edge of kink; the lyrics border a PG rating. She opens the song with a banshee screech that raises serious goose-bumps. Also, it is "Dirty Dancing" par excellence.

Boogie K sampled the voice of Davis at 1:45 seconds into his song, Troubleman, on his album, Moonshine Sister. 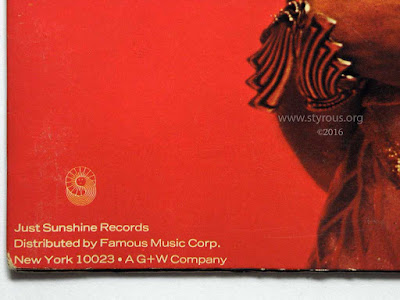 Betty Davis was born Betty Mabry on July 26, 1945, and grew up in Durham, North Carolina, and just outside Pittsburgh. One of the first songs she wrote, at the age of twelve, was called I’m Going to Bake That Cake of Love. When she was 16 she went to New York City and enrolled at the Fashion Institute of Technology.

In New York City, she met Jimi Hendrix, Sly Stone, soul singer Lou Courtney, and many other music giants.  She wrote Uptown (to Harlem) for the Chambers Brothers (link below to song on YouTube)

Davis was a pioneer of fusion music, she mixed up funk, rock, soul and blues into a style all her own; she influenced many fusion artists including Miles Davis. 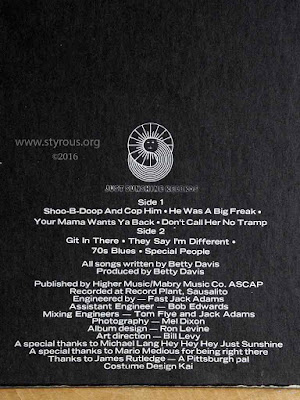 
She met Miles Davis in 1967 and married him in September 1968. In just one year of marriage she influenced him greatly by introducing him to the fashions and the new popular music trends of the era. In his autobiography, Miles credited Betty with helping to plant the seeds of his future musical explorations by introducing the trumpeter to psychedelic rock guitarist Jimi Hendrix and funk innovator Sly Stone. The Davis album Filles de Kilimanjaro (1968) includes a song named after her and her photo on the front cover.

Miles believed that Hendrix and Betty had an affair which supposedly hastened the end of their marriage, but Betty denies this. Hendrix and Miles stayed close after the divorce, planning to record until Hendrix's death. The influence of Hendrix and especially Sly Stone on Miles Davis was obvious on the album Bitches Brew (1970), which ushered in the era of jazz fusion. The origin of the album's title is unknown, but some believe Miles was subtly paying tribute to Betty and her girlfriends. In fact, it is said that he originally wanted to call the album Witches Brew—it was Betty who convinced him to change it. 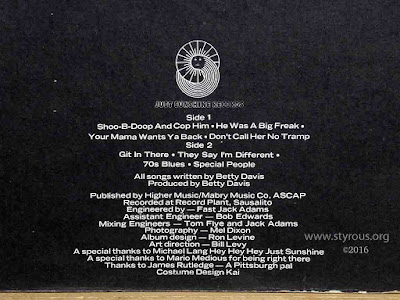 "She was this force of personality, writing all her own songs, and eventually producing her own albums," Wang continues. "She's this fascinating aberration. She wasn't the mouthpiece for a male producer or songwriter, but an independent black female artist in the early 1970s.'

In part, theorizes Wang, she was a victim of her own independence. Because she sought to control every facet of her own career, she eschewed outside management. "She wanted to knock down the gates herself. But that's really hard for any artist to do, let alone a black female artist."

Nor was time on her side. Just a few years after Davis withdrew, musicians like Nona Hendryx and Grace Jones were completely overhauling notions of how black women should sound, look, and act. "If [Betty] had waited five years, and come out during the punk era, she would have killed it," insists Wang. Only now does the world finally seem ready for Davis. Whether they are aware of her work or not, pop stars like Kelis and Macy Gray embody the same fiery spirit she pioneered." 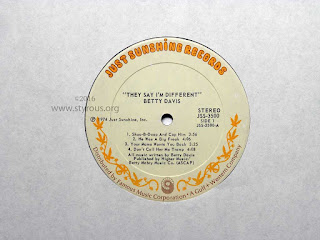 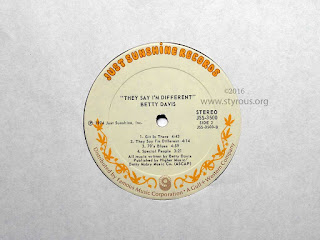 All songs written by Betty Davis