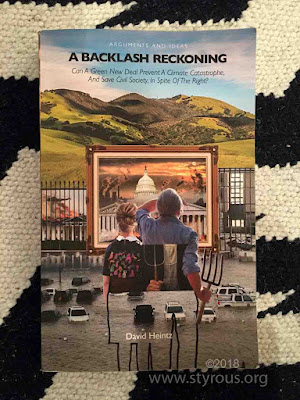 David Heintz ~ A Backlash Reckoning (Can a Green New Deal Prevent a Climate Catastrophe, And Save Civil Society, In Spite of the Right?) is quite a mouthful for the title of a book but there it is!

I'm still reading it and a little over three quarters of the way through it. I had no intentions to write about it until I finished it but the report issued today by the Trump administration, on Black Friday (How appropriate is that?), prompted me to do SOMETHING about it.

The report issued by the Trump administration emphasizes the dire threat human-caused global warming poses to the United States and its citizens.

"Earth’s climate is now changing faster than at any point in the history of modern civilization, primarily as a result of human activities," researchers say in the report, officially Volume II of the National Climate Assessment. (Volume I was released last year.)

A Backlash Reckoning deals with the exact issues involved with the report released today; however, not just the results that were in the report but the causes that contributed to them.

It connects the oil, drug and other companies that have the government, including the president of the United States, Donald Trump, totally in their grasp; it details the greed and lack of ethics of the parties involved and some of those parties are surprising. While those parties have been having a party, the world is paying for it in more than financial ways. A lot has been common knowledge for quite a while but there were things I had not been aware of.

Heintz references the many people who have been sounding the warning for decades; Rachel Carson in the 60's, Al Gore in the 70's up to today and many others. Gore received the Nobel Peace Prize in 2007 for his environmental work.
Backlash has dark humorous aspects to it as Heintz has a great sense of irony; the book is divided into five parts, the first titled, "Part 1: The Accidental President: How Donald Trump forced a rewrite of this book."

The timing of the report could not have been more pertinent to the subject of the book and vice versa so I had to write something on this day, Black Friday, again, how appropriate!

When I have finished the book I will write more. However, as I have been reading the book, one thing has occurred to me, the people who SHOULD be reading it, won't and that's the real Tragedy!

The book is available through Thriftbooks (link below).

Trump has given a whole new meaning
to the expression, "Black Friday."