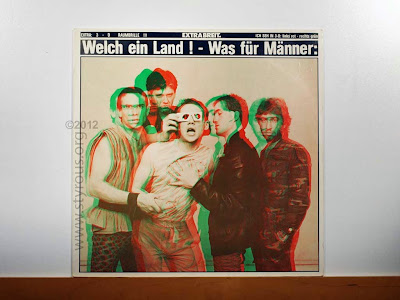 I started the Vinyl LPs series because I have a collection of over 20,000 vinyl LP albums I am selling; each blog entry is about an album from my collection. Inquire for information here.

One of the things I have always been intrigued with is the wonderful innovations record producers utilize in the design of record albums. Record album covers are an art unto itself; link to a limited choice of books on the subject of album cover art that only scratches the surface.

Welch Ein Land! - Was Für Männer: (in 3-D) used a stereogram to set it aside from other albums with excellent effect. I was attracted to the album (which turned out to be mostly punk rock music) because of the 3-D cover. Stereoscopy (also called stereoscopics or 3D imaging) is a technique for creating or enhancing the illusion of depth in an image by means of stereopsis for binocular vision. The word stereoscopy derives from Greek στερεός (stereos), meaning "firm, solid", and σκοπέω (skopeō), meaning "to look, to see". Any stereoscopic image is called a stereogram (link to more info below). Originally, stereogram referred to a pair of stereo images which could be viewed using a stereoscope.

Of the many techniques to produce a 3-D effect that they had to choose from, they settled on the Color anaglyph system; a double image, one green, one orange (link to more info below). 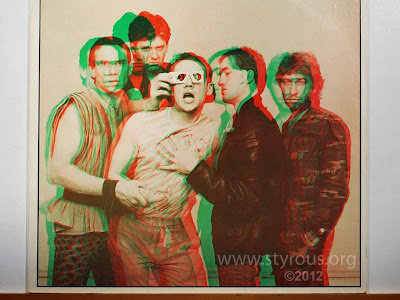 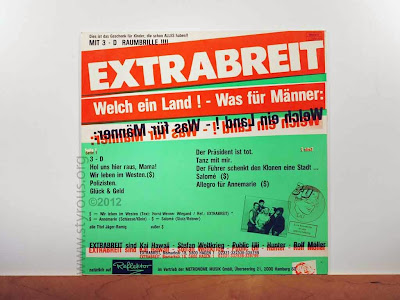 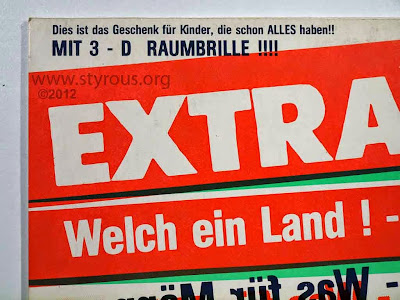 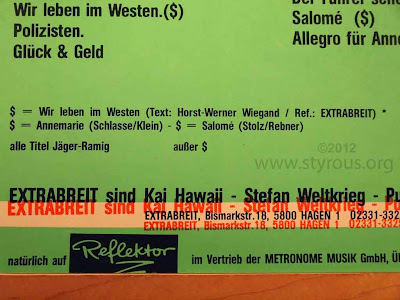 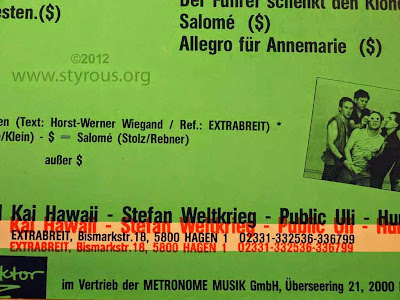 
But it was necessary to have a stereoscope to see the 3-D effect, so, one was graciously supplied with the album. It is a cardboard with two "eyes" covered with a tinted film, each a different color, one green, one orange. 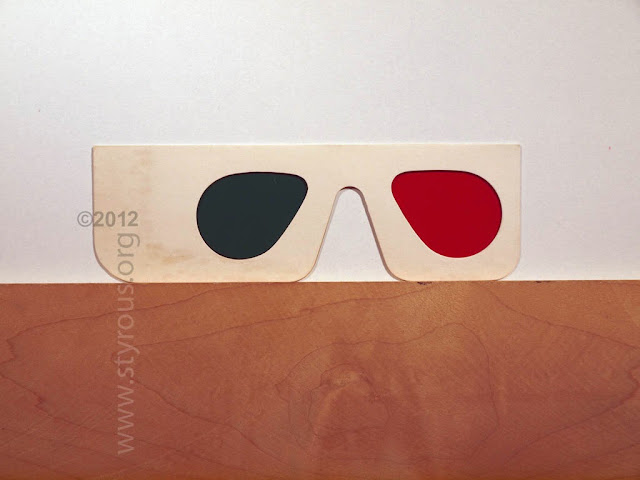 WAY kool! Snaps me back to 3-D movies of the fifties (link to list below), headaches, nausea, disorientation ’n all! Reason: there are two primary effects of 3D film that are unnatural for human vision - crosstalk between the eyes, caused by imperfect image separation, and the mismatch between convergence and accommodation, caused by the difference between an object's perceived position in front of or behind the screen and the real origin of that light on the screen. Anyway, it's great fun.


The liner notes are on the inner sleeve of the album, printed on a vibrant orange-red that makes your eyes cross, augmenting the visual disorientation of the cover. YIKES! 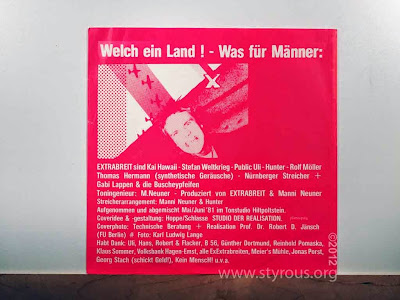 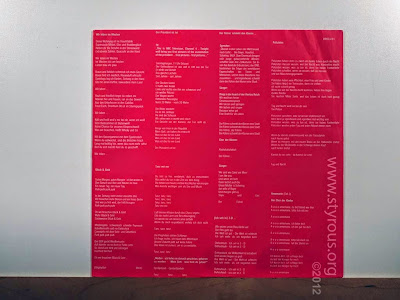 
Extrabreit is a German band established in Hagen, Germany in 1978. The band was one of the most successful exponents of the Neue Deutsche Welle movement of the 1980s. Their music is not typical of the NDW genre. It was influenced heavily by punk rock music, and their lyrics were often critical of politics and society. The members viewed themselves as punks, whose only association with the NDW was that they appeared at the same time. As testament to that, they wrote on their Homepage (link below): "Ja wir haben den Scheiß eben mitgemacht! (Yeah, we went along with that shit!)." The height of their career was from 1981 until 1983. I discovered them sometime in 1982. 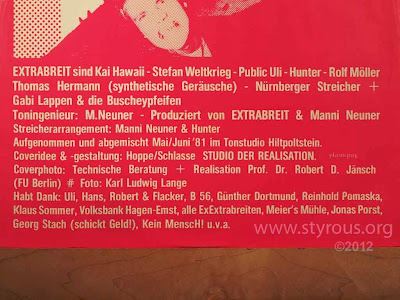 
Extrabreit took punk, pop, and German schlager, and mashed them together with tons of attitude. The name Extrabreit (Extra wide) was inspired by a fat permanent marker that was lying around in their rehearsal studio. The band sang in German (the reason the album appealed to me), which was highly unusual at the time and won the band some attention.

Like a lot of punk bands of the era, Extrabreit chose to adopt stage names, turning Schlasse into "Kai Havaii" and Klein into "Kleinkrieg" (Guerilla Warfare).

In early 1981, Extrabreit returned to the studio to record, Welch ein Land! -- Was für Männer: (What a Country! What Great Men:). Polizisten immediately turned into the band's first hit, gaining strength when the Bavarian government banned the song for openly insulting the country's police force.

By 1982, the album was established in Germany's Top Five album chart -- and against all odds Extrabreit had turned into Germany's most successful band of the year.

Ok, now, about the music!


As with all record albums, I have a favorite cut. Polizisten (Policemen), is it for me on this one; it is  Neue Deutsche Welle (German new wave) at its very best. 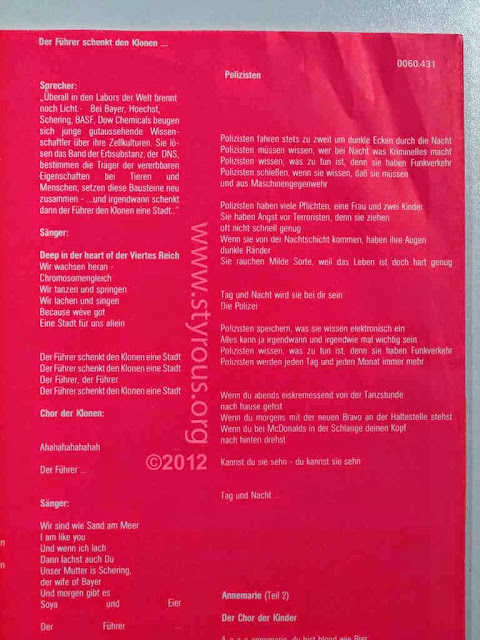 
Slow, precise and clear, it moves slowly with an intensity that is sinister and purposeful. It tells of "the Police being afraid of terrorists; that if you are eating ice cream or in the line at McDonalds, they are watching you; day and night they will be with you." It also talks about shooting cops. Strange, the lyrics are as pertinent today as it was in 1981.


My next favorite song is Der Praesident ist tot which starts out with an electronic, spacey effect that goes into a driving, deliberate, moderately slow march beat for about two minutes until the lyrics begin. 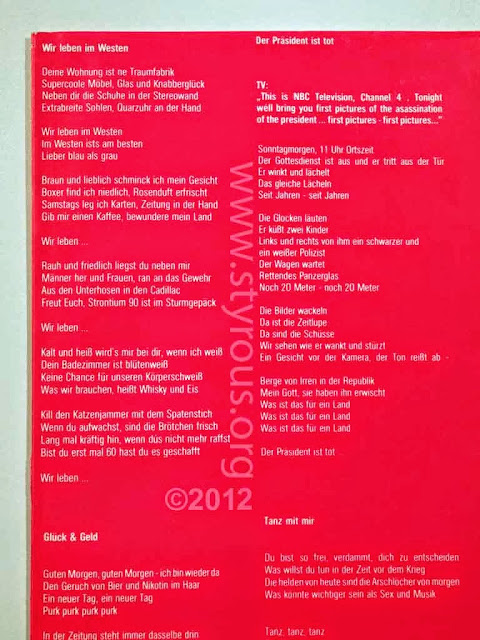 The rest of the music on the album is pretty standard punk rock. 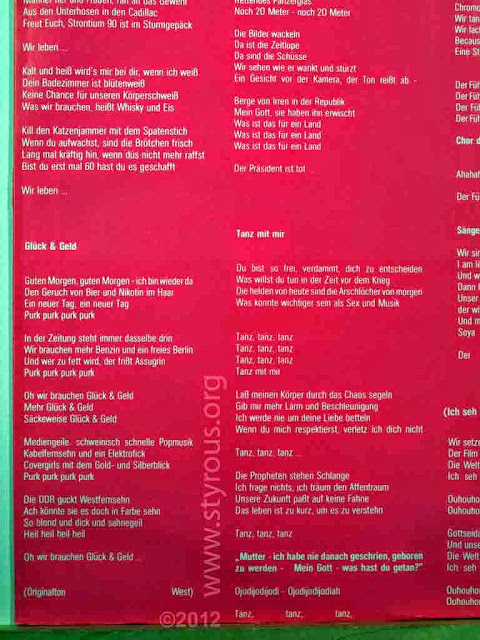 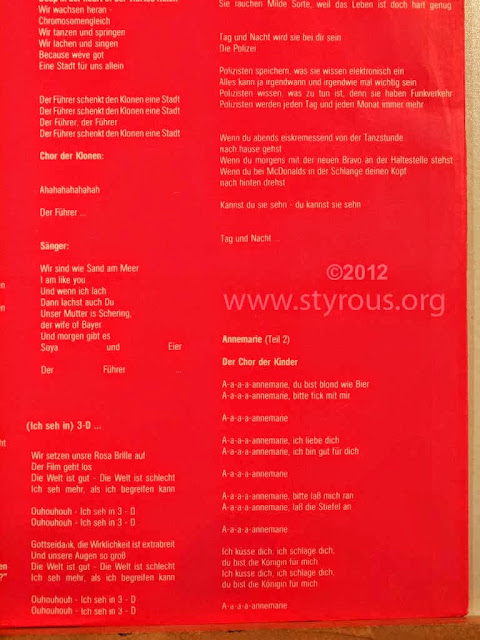 Extrabreit played their 1000th concert on August 27, 2005, to several thousand fans in Hengsteysee in Hagen, Germany. The band was presented with their first Platinum record for their first major success in 1980. 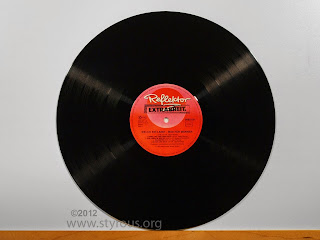 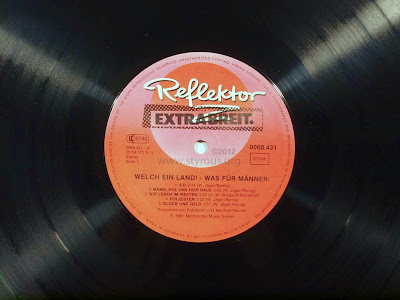 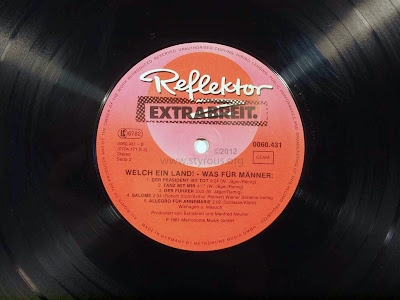 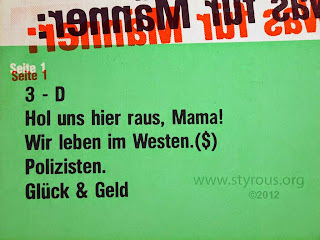 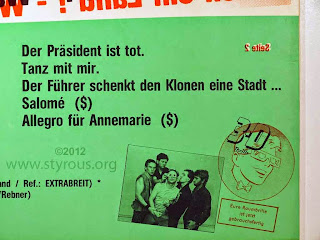