I had my dream studio in the Mission district of San Francisco for almost 30 years (29 years, 3 months and 15 days to be exact). It was heaven on earth, that's why I lived there for so long. I would probably still be there if the landlords hadn't sold the building and the new owners hadn't kicked my ass out so they could sell the building in a year or so to make a profit (I later heard about it from someone). It was at the height of the dot com explosion/fiasco in 2001.

Anyway, I loved all the many things available within walking distance from my studio; great ethnic food markets (every type of Latin, Asian, African-American, etc.), shops selling goods from all over the world, clothing and book stores and, of course, record shops. One of my favorite stores was a Greek one on Mission Street just three blocks from my studio that sold Greek food (oh, my, the kourabiedes, touloubakia and halva they sold made my mother crazy), books and music. I found terrific music there, not the usual Rembetiko or Zorba-the-Greek type bouzuki (although, they had tons of that) but unique types like Stamatis Spanoudakis whom I discovered when I was on Cyprus in 2000. Another favorite shop of mine was Dog Eared Books which was down on the corner from my studio. It sold really great music and was VERY dangerous, financially, to me. Yep, I was in heaven there in the Mission.

One of the gems in the 'hood was a terrific old movie theater, The Roxie (four and a half blocks from my studio), that showed the most incredible indi and underground films. Sometime in 1978 I went there one night and saw a private screening of footage of an uncompleted film, "Vileness Fats" (which has never been publicly released) by The Residents. It was in black and white video (color was not available at the time) and the sets were reminiscent of German Expressionism of the 1920s and 1930s á la "Cabinet of Doctor Caligari" (image samples from the Caligari film). I had never heard of them before. It was TOTALLY weird! I HAD to have their music! I searched until I finally found the album, Not Available, which had some of the music from the film. It was their fifth album, the first of many of their albums I bought. And they have MANY! 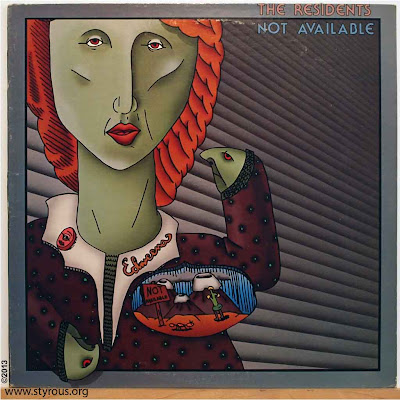 The back of the Not Available album has a surreal, black and white still from the Vileness Fats video. 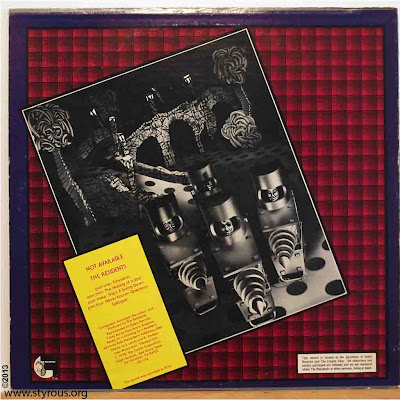 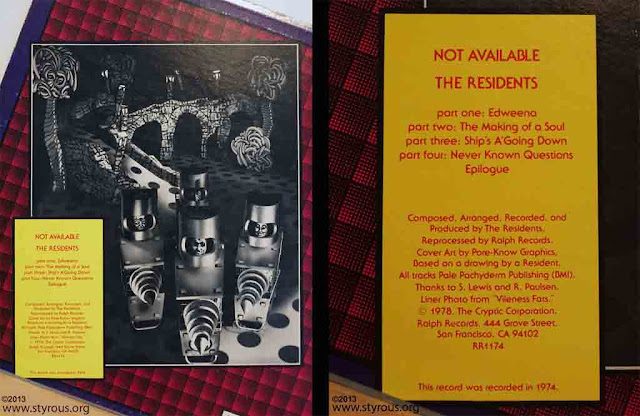 
The album was recorded in 1974, but the LP was not released until 1978 by the Cryptic Corporation's Ralph Records. 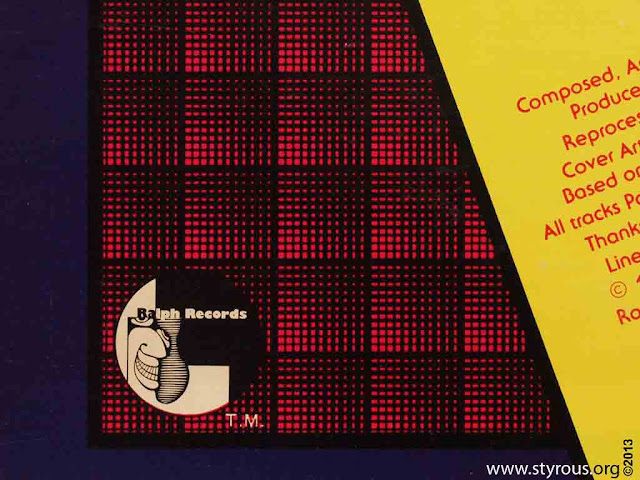 According to Discogs, the first pressing with purple labels (5000 copies), suffered from an audible blemish on side B during "Ship's A' Going Down". Most of these records were recalled and destroyed. However, several hundred copies are still in existence. The second pressing had an orange label, the third and fourth green, the fifth yellow and the sixth white. My copy is from the first pressing. 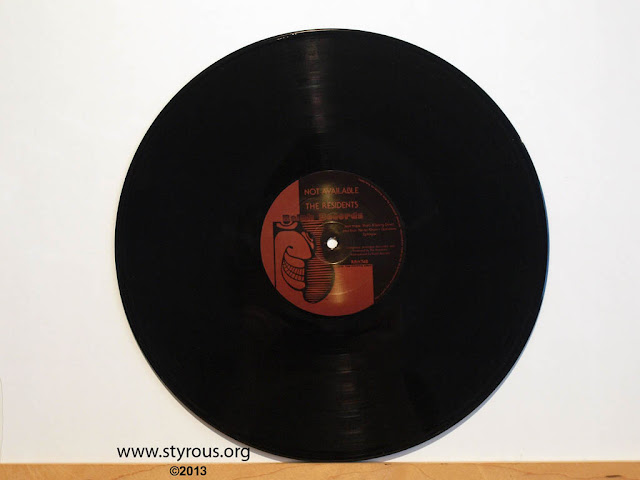 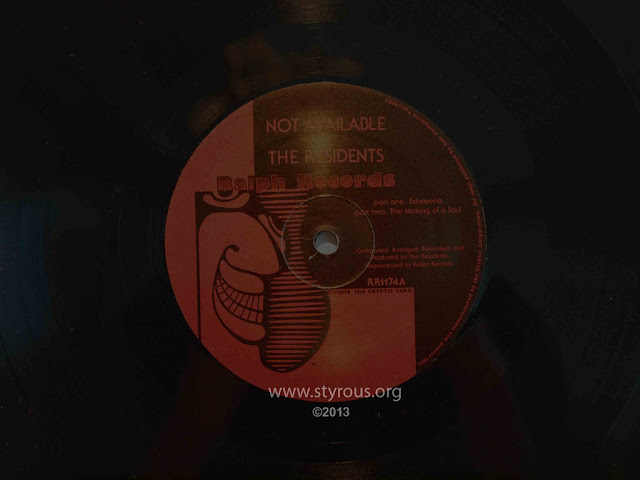 I remember when I bought the album and heard the blemish I was pissed and was going to return the album but somehow never got around to it. Now, that's what I call dumb luck.

In 1984, The Residents took their old Vileness Fats 1/2" black-and-white video footage, transferred it to VHS and created a half-hour video from their original fourteen hours of footage. In addition, they created an all-new soundtrack, releasing the result as Whatever Happened To Vileness Fats?.


I saw them in concert in January of 1987 at The Warfield in San Francisco; Penn and Teller opened for them. At one point during the performance two stage hands came on with clamp lights in each hand and waved the lights over the performers in rhythm to the music, creating a cheap but effective strobe-like effect.

I photographed The Residents in concert in 2010 at the Berkeley Art Museum. They had added an accordion, violin and cello since I'd last seen them and donned new costumes but they were as wacky as ever. 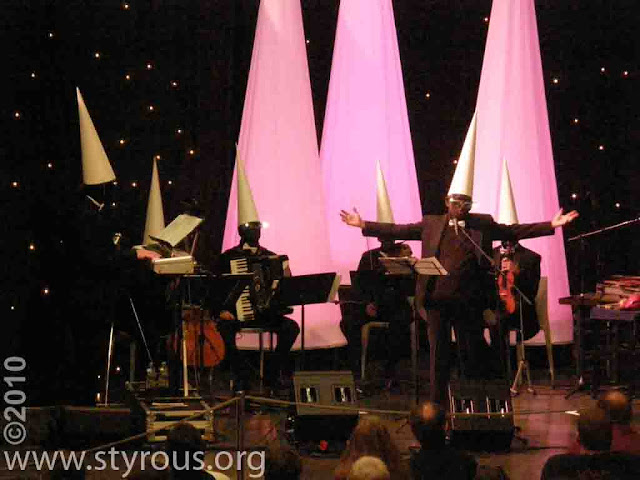 The Residents in concert at the Berkeley Art Museum, 2010
photo by Styrous®

According to NPR Music, 2012 marked the 40th anniversary of the founding of The Residents whom they credit with pioneering punk rock, art rock and techno.

Just to give a sense of the tone of the album, here are the lyrics for the first song:

Chorus:
Coming into column nation is a gracious thing
A stirring and a whirring and a broken widow(er)'s pain;
It's causing easy ought to just leave a lust alone
But when a friend has shrunken skin where do you throw the bone?
(The matter that's been spoken to's a fragrant little thing
It's open and was known to need a token diamond ring.)

Young Girl:
Investing space without a place;
Confusing grace with outer space.
Chorus:
To please the breeze you freeze the seize,
Combat disease and bend the knees;
And if explicit matters naught,
Extend the grin -- but don't get caught.
Now Uncle Remus, Uncle Remus, where have you been we say
(We saw the end of Uncle mend and turn into into today).
But now they say there's room no more for such a friendly friendly whore

Chorus:
But a sentence existing inside of a rhyme
Is only just a token left spoken in time

Uncle Remus:
Can tomorrow be more than the end of today?

Young Girl:
Or do posies just bloom for the feel of a may?
Investing space without a place;
Confusing grace with outer space.

Chorus:
The way is a never for severing two,
(For) beginnings are endings for all but a few.

The music is even weirder than the lyrics and I love it. If you're interested, you can hear Edweena on YouTube, as well as selections from Whatever Happened To Vileness Fats?.

What a wild, whacky and wonderful time the new wave era was. Boy, do I miss it and my dream studio.