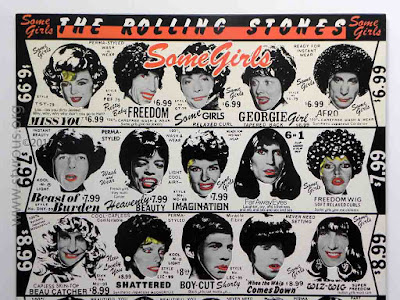 
Some Girls is the 14th British and 16th American studio album by the Rolling Stones, released almost 40 years ago on June 9, 1978, on Rolling Stones Records. This is the original pressing with the die cut album cover which has celebrity faces on the front; the faces were removed on later issues. By sliding the inner sleeve back and forth the faces are interchangeable. 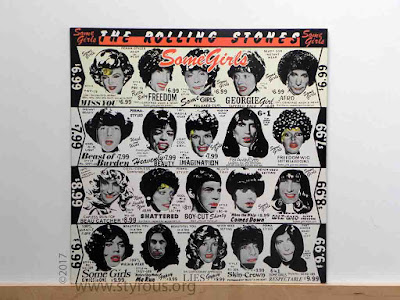 
I remember the first time I heard, Miss you. I thought to myself, "Damn it! The Stones have sold out and gone disco!" However, I subsequently found myself dancing my ass off to the song night after night in some bar somewhere. It is a mighty good dance song and it became one of my favorite tunes at some point.

Mick Jagger and Ronnie Wood insist Miss you wasn't conceived as a disco song, while Richards said, "...Miss You was a damn good disco record; it was calculated to be one." In any case, what was going on in discotheques did make it to the recording. Charlie Watts said, "A lot of those songs like Miss You on 'Some Girls'... were heavily influenced by going to the discos. You can hear it in a lot of those four-to-the-floor and the Philadelphia-style drumming." For the bass part, Bill Wyman started from Preston's bass guitar on the song demo. Chris Kimsey, who engineered the recording of the song, said Wyman went "...to quite a few clubs before he got that bass line sorted out", which Kimsey said "made that song." Jagger sang a good part of the chorus using falsetto "ooh"s often in unison with harmonica, guitar and electric piano.

Unlike most of Some Girls, Miss you features several studio musicians. In addition to Sugar Blue who, according to Wood, was found by Jagger busking on the streets of Paris, Ian McLagan plays understated Wurlitzer electric piano, and Mel Collins provides the saxophone solo for the instrumental break. Miss you was the last #1 pop hit by the Stones. 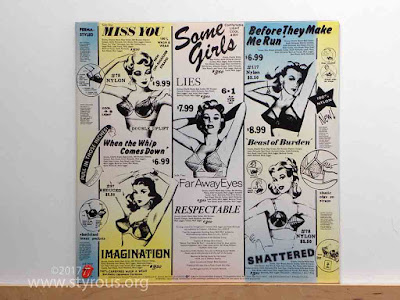 The Rolling Stones ~ Some Girls
vinyl LP back cover

My next favorite songs are Far Away Eyes and Beast of Burden. No two songs could be more different yet have the same feeling. Each is a great slow dance song in its own way.

Far Away Eyes is a classic country-western song in the best old time tradition with that great twangy guitar sound by Ron Wood, male chorus towards the end and wonderfully typical country western blues lyrics with a twist (link below).

When the Whip Comes Down is remarkable in the Jagger-Richards repertoire. It’s the story of a gay man who comes to New York seeking his fortune and becomes a trash collector; the lyrics are explicit (link below).

Another song whose lyrics deal with New York is Shattered, an edgy love note to the City’s gritty late ’70s soul. Jagger reportedly wrote the lyrics, sung in sprechgesang, in the back of a Manhattan cab. Richards’ stuttering rhythm guitar riff, with a hint of phase shifter, has the impact of a snarling dog. The bass track is played by Ronnie Wood. It was released as a single in the United States with cover art by illustrator Hubert Kretzschmar and climbed to number 31 on the Billboard Hot 100 in 1979. 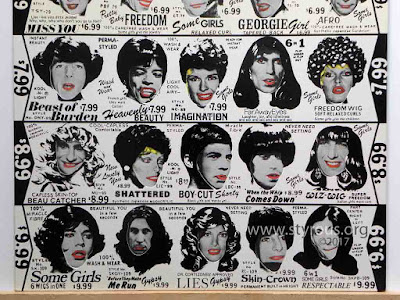 
By 1976, the Rolling Stones' popularity was in decline as the charts were dominated by disco music. Jagger is generally regarded as the principal creative force behind Some Girls. He claimed in a 1995 interview to have written a great number of the album's songs (though when the amount was pointed out to him he denied that the record was mostly his own), including its signature song, Miss You. In addition to punk, Jagger claims to have been influenced by dance music, most notably disco, during the recording of Some Girls, and cites New York City as a major inspiration for the album, an explanation for his lyrical preoccupation with the city throughout.

"The inspiration for the record was really based in New York and the ways of the town. I think that gave it an extra spur and hardness. And then, of course, there was the punk thing that had started in 1976. Punk and disco were going on at the same time, so it was quite an interesting period. New York and London, too. Paris—there was punk there. Lots of dance music. Paris and New York had all this Latin dance music, which was really quite wonderful. Much more interesting than the stuff that came afterward." ~ Mick Jagger 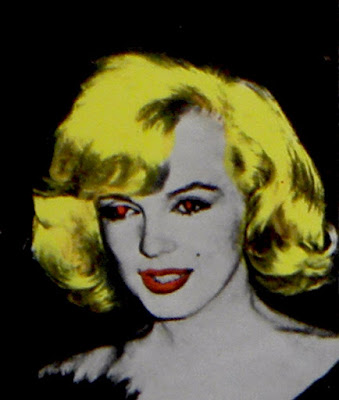 
The album cover for Some Girls was conceived and designed by Peter Corriston, who would design the next three album covers, with Illustrations by Hubert Kretzschmar. An elaborate die-cut design, with the colours on the sleeves varying in different markets, it featured the Rolling Stones' faces alongside those of select female celebrities inserted into a copy of an old Valmor Products Corporation advertisement. 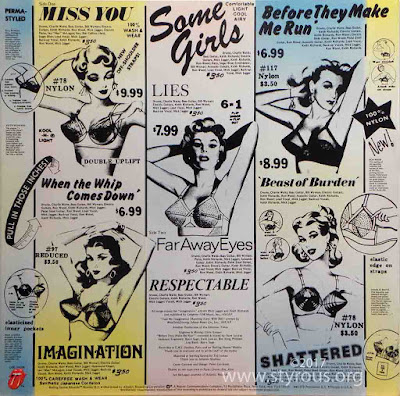 The cover design was challenged legally when Lucille Ball, Farrah Fawcett, Liza Minnelli (representing her mother Judy Garland), Raquel Welch, and the estate of Marilyn Monroe threatened to sue for the use of their likenesses without permission. Similarly, Valmor did take legal action and were given a monetary award for the use of their design.

The album was quickly re-issued with a redesigned cover that removed all the celebrities, whether they had complained or not. The celebrity images were replaced with black and punk style garish colours with the phrase "Pardon our appearance - cover under re-construction." Jagger later apologised to Minnelli when he encountered her during a party at the famous discothèque Studio 54. The only celebrity whose face was not removed was ex-Beatle George Harrison. As with the original design, the colour schemes on the redesigned sleeves varied in different markets. 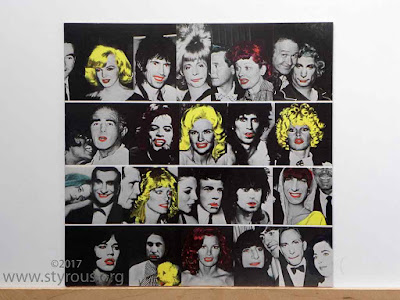 There is an interview, Facts About the Stones’ Most Notorious Record Cover, by John Hood on the Huffinton Post with sleeve co-creator Hubert Kretzschmar (link below). 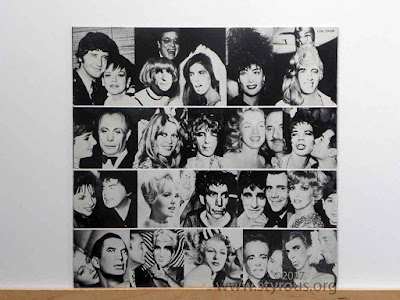 
Some Girls: Live in Texas '78 is a live concert film by The Rolling Stones released in 2011 (link below). This live performance was recorded and filmed in 16 mm during one show at the Will Rogers Auditorium in Fort Worth, Texas on 18 July 1978, during their US Tour 1978 in support of their album Some Girls. The concert film was released on DVD/Blu-ray Disc, Combo (DVD & CD set) and (Blu-ray Disc & CD set) on 15 November 2011. The CD was exclusive to the combo sets, and was not released individually. 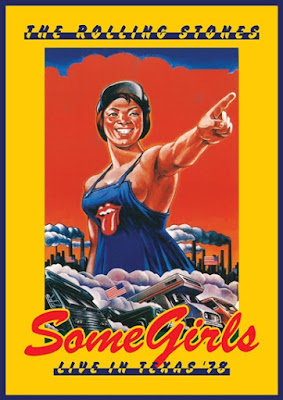 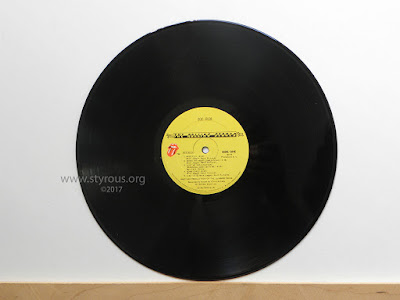 The Rolling Stones ~ Some Girls
vinyl LP record, side 1 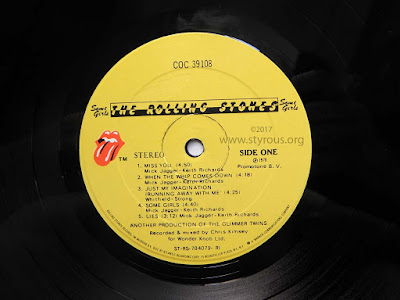 Some Girls reached #1 in the US and #2 in the UK, becoming their biggest-selling studio album with over 11 million copies sold worldwide. Beast of Burden, was released as second single in the US and it reached #8 on the Billboard Hot 100. Respectable (in the UK) and Shattered (in the US) would follow as the next singles, both becoming Top 40 hits as well.

Some Girls reached number one on the Billboard 200 album chart, and became the band's top selling album in the United States, certified by the RIAA as having six million copies sold as of 2000. It was a major critical success, becoming the only Rolling Stones album to be nominated for a Grammy in the Album of the Year category.

In 2003 Some Girls was ranked number 269 on Rolling Stone magazine's list of The 500 Greatest Albums of All Time. 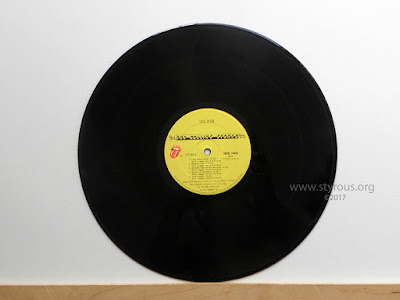 The Rolling Stones ~ Some Girls
vinyl LP record, side 2 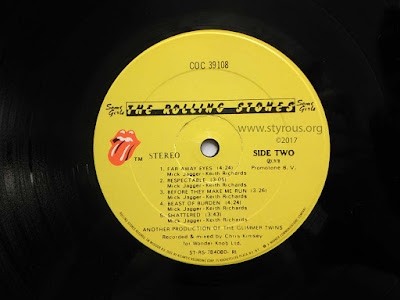 The Rolling Stones ~ Some Girls
vinyl LP record label, side 2

Tim Hinkley was flown into Paris to record on this album. The producer Chris Kimsey wiped out Ian's work and replaced it with Tim's performances. Tim is not mentioned on the album's credits, however, there are various interviews which document this as well as his Wikipedia page.

Shortly after release, this version was withdrawn and the celebrity faces included on the inner sleeve were removed.

There is a second, altered version with celebrity faces removed.

Barcode and Other Identifiers